Climate change is an existential threat in progress. As scientists warn, we must act decisively by 2030 if we are to avert disaster — and possibly extinction. It’s encouraging to see more and more people waking up to the urgency of climate action. The ongoing School Strike for Climate is particularly inspiring.

Meanwhile, for more than sixty years, the existential threat of nuclear war continues to hang over our heads. Given the list of horrific near misses, we’ve actually been lucky. Yet the nuclear threat languishes on the back burner of both the general public’s attention span and the national news media’s priority list. That’s why the work being done by Physicians for Social Responsibility (PSR) is so important. 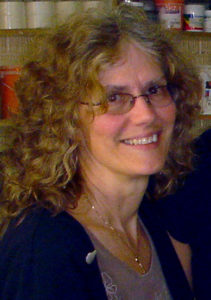 I was honored to have PSR’s Dr. Maureen McCue on this week’s Fallon Forum. (My other guest was Des Moines Mayor Frank Cownie. Check out our conversation about climate change at the 2:17 minute mark.) Maureen writes:

“Now that we’ve survived St. Patrick’s Day, I again turn my attention to the growing risk of nuclear war. Why growing? Largely because President Trump’s bellicosity is taking us to the brink. Trump’s decision to pull out of the Intermediate-range Nuclear Forces (INF) treaty with Russia is a huge step backwards. Add to that his making nice with Kim Jong Un, North Korea’s dictator, his ignoring of the tensions between Pakistan and India, and his promotion of the myth that Iran may soon have nuclear weapons (even as he pulls out of our treaty with that country), and we have an escalation of nuclear tension like none we’ve seen in a long time.

“On top of that, President Trump is committing trillions of dollars to building more nuclear weapons that will only further destabilize the world. And I would be remiss not to mention his lack of attention to any of our real needs — like climate mitigation, environmental clean up, health care, etc.

“With all these actions by a president who seems remarkably disconnected from reality, we should pause to consider the risks to our future. One upcoming effort to work our way back to a saner, safer nuclear policy is the Nuclear Abolition Training scheduled for March 30 in Iowa City and March 31 in Des Moines. The events are open to the public.

“Climate change is being brought on by powerful industries indifferently heating the atmosphere. Nuclear winter could be brought on by an exchange of only 100-200 ‘small’ (Hiroshima-size) bombs. Further, if Earth’s climate continues to unravel, food and water resources will dry up, tensions will heat up, populations will move, conflicts will escalate (as in India-Pakistan, Iran-Israel, etc.) and boom, you have the kindling for setting off a nuclear nightmare. It’s all connected, and needs to be seen as part and parcel of the many myths undergirding both existential risks.”

Check out our conversation with Maureen at the 29:00 minute mark. And if you have questions about the trainings or the work of PSR, Maureen can be reached at info@psriowa.org. Thanks!