Ed Fallon served fourteen years in the Iowa Legislature, then ran for Governor in 2006 and US Congress in 2008. Now a recovering politician, his work is laser-beam focused on the climate crisis. 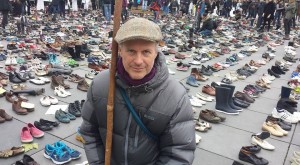 Ed Fallon in front of a display of 10,000 shoes at the site of a cancelled climate march before the UN Climate Summit in Paris, December 2015.

For the past ten years, Ed has hosted the most prominent progressive political talk show on the radio in Iowa. The Fallon Forum broadcasts on two stations in Iowa, including KHOI 89.1 FM (Ames) and on stations in four other states. Ed also directs Bold Iowa, which helped lead the opposition to the Dakota Access Pipeline. Most recently, he led Bold Iowa’s Climate Bird Dog effort to bird-dog presidential candidates on the urgency of climate change.

In 2014, Ed spearheaded the Great March for Climate Action, leading 35-50 climate activists on a 3,100-mile trek from Los Angeles to Washington, DC. Ed and his partner, Kathy Byrnes, also operate an urban farm near downtown Des Moines, called Birds & Bees Urban Farm, where they grow a large portion of their food and offer classes on how to turn your yard into dinner.

Ed Fallon was born in Santa Monica, California while his father was stationed there as a sergeant in the US Army. He grew-up in Saugus, Massachusetts and was heavily influenced by his Irish grandparents and relatives during repeated trips to the family farm in Roscommon County, Ireland. While only marginally interested in academics in high school, he excelled as an athlete, setting the school record in the high jump and as a member of the 4×400 indoor track relay team.

He studied music and philosophy at Marlboro College in Vermont after which he traveled the world for six years. He worked on farms in Nova Scotia, walked across southern England during blue bell season, stayed for three weeks with Carmelite nuns at a monastery in Cairo, spent time on a kibbutz in Israel, and served as a Franciscan Volunteer on an Objibwe reservation in northern Wisconsin. From 1985 – 1987, he attended Drake University, where he received a degree in religious studies.

In the late 1980s, Ed worked in the peace movement. He organized the Iowa stretch of The Great Peace March and founded Des Moines Campaign for Nuclear Disarmament. Well-versed in the writings of Mahatma Gandhi, Ed became friends with Gandhi’s granddaughter, Sumitra Kulkarni, and traveled to India in 1995, staying with her and her family and studying ways in which modern Indians continue to use Gandhi’s ideas of non-violence to address contemporary social and political problems.

From 1993 – 2006, Ed served fourteen years in the Iowa Legislature, representing residents of downtown Des Moines, the surrounding neighborhoods, and the City’s northeast side. As a state lawmaker, Ed worked to give a voice to the voiceless, including family farmers, workers, the poor, minorities, prisoners, and the LGBTQ community. He led the way on several key initiatives, including efforts to address urban sprawl, reforming laws to protect land from eminent domain, ending corporate giveaway programs, opposition to the death penalty, reforming the delivery of human services, opposition to the official English bill, and marriage equality for gay and lesbian couples. His 1996 speech in defense of LGBT equality gained him an invitation from Congressman Barney Frank to testify before the US Congress.

In 1998, Ed helped found 1000 Friends of Iowa, a land-use and anti-urban sprawl group. He served as its executive director for five years. In June of 2006, he ran for Governor in the four-way Democratic primary, receiving 26% of the vote. Ed also ran for Congress in 2008, losing to incumbent Leonard Boswell in the primary.

In 2009, Ed began a career as a talk show host with the Fallon Forum. It remains one of the few independent talk shows in Iowa, and currently broadcasts on six radio stations — two in Iowa and in four other states.

In 2014, Ed spearheaded the Great March for Climate Action and led 35-50 climate activists on a 3,100-mile trek from Los Angeles to Washington, DC. Ed was one of five marchers to walk every step of the way. Marcher, Walker, Pilgrim is Ed’s memoir from that experience and his first book.

In March of 2015, Ed walked 400 miles along the length of the proposed Dakota Access Pipeline. He continued his work to advocate for the farmers and landowners he met during that walk, and fought hard to stop the pipeline. That battle continues in the courts.

In November, 2015, Ed walked 200 miles from Normandy Beach to Paris in advance of the UN Climate Summit. He also led the 85-mile Climate Justice Unity March in April, 2017 and the First Nation – Farmer Climate Unity March in September, 2018.

Ed is an accomplished musician on several instruments, with a focus on the piano music of Frederic Chopin. He speaks some French and Spanish. He was raised Catholic, was a member of Trinity United Methodist Church for 20 years, and considers himself staunchly ecumenical. He lived in the inner-city of Des Moines for nineteen years and now lives in Sherman Hill. An avid urban farmer, he and his partner, Kathy Byrnes, grow much of their food on their urban farm, called Birds & Bees Urban Farm. Ed maintains strong connections to his family’s farm in Ireland, where he organized the planting of 25,000 oak trees in 2000.

Ed’s spirituality continues to inspire and direct him in his work, and he is not hesitant to say that his life is committed to working for social justice, both within and outside the political process. While Ed feels he was able to accomplish much during his years as a state lawmaker and in other venues of public service, he insists that the most satisfying part of his job is when someone says to him, “Years ago, you helped me and my family with a problem, and our lives are now better for it.”