It’s been quite a year for our climate. Fires in California. Drought in the southwest. Hurricanes along the Atlantic coast. Unseasonal cold spells in the upper Midwest. Climate change is disrupting our lives more and more — and that disruption is going to get worse over the next decade. 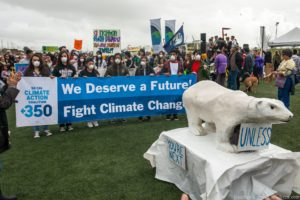 Start of the Great March for Climate Action, March 1, 2014 on the Pacific Ocean in Los Angeles, CA. (Photo: Jonathan Lee)

With a growing sense of urgency, I’m committed to doing all I can to wake up people to the precariousness of our situation. Over the next year, a major focus of my work will be to tour Marcher, Walker, Pilgrim –– my memoir from the 2014 Great March for Climate Action, which will be released on December 2 in Des Moines.

During the 3,100-mile, 8-month walk from LA to DC, our March became a mobile village, weathering harsh conditions, sharing joys and sorrows, and intensifying our commitment to sound the alarm about climate change.

The March was the hardest thing I’ve ever done.

The second hardest thing I’ve ever done was to write a book about it.

In the Introduction to Marcher, I say, “Like wine, writing is truth serum, possessing the power to impart unanticipated clarity and understanding to one’s experiences. It liberates even as it leads to discomfort. It exposes fears and aspirations one would rather leave undisturbed. Writing facilitates self-discovery, and I’ve often found myself unprepared to embrace the self that writing discovers.” 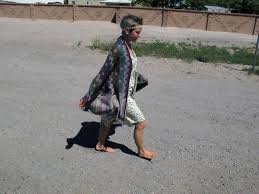 Through walking, and now through writing, I’ve engaged in what has been, at times, painfully candid introspection. The experience has brought into focus my lifelong search for love and meaning. In many ways, Marcher is a confession of both mistakes made and knowledge gained, with personal reflections woven into the intense challenge of walking a great distance while living among nomads on a life-and-death mission.

More than anything, I want Marcher to inspire all of us to push back against climate change, both personally and politically, with everything we’ve got. If I can bring people into the conversation through a deeply personal narrative that unfolds during a fascinating adventure, then the discomfort of having revealed so much of my inner self will have been worth it. 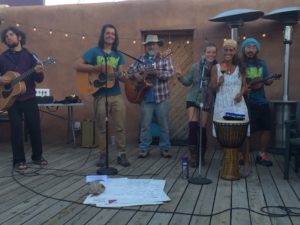 The Climate Justice Gypsy Band performs in Albuquerque, May 2014.

I hope you’ll buy Marcher. Heck, I hope you’ll buy lots of copies of Marcher. And I hope you’ll come to the book launch on Sunday, December 2 at 2:00 at 500 E Locust in Des Moines. Readings are also scheduled for Davenport, Iowa City, Cedar Rapids, Harlan, and Okoboji. I want to take this message to every city and county in the state. So if you’re interested in pulling together a reading in your community, let me know.

As you can imagine, publishing and printing this book has been costly. Please go to the Bold Iowa website and check out excerpts, endorsements, photos, and details on how to purchase the book. If you’d like to make an additional donation, that would be greatly appreciated as well. Thank you.