Whew! Just when I was starting to fret about how we pipeline fighters were going to come up with $900 million, a federal judge swoops in and saves the day. Two years ago, Energy Transfer Partners (ETP) sued a whole bunch of pipeline opponents, seeking nearly a billion dollars in damages!

On Valentine’s Day (for what that’s worth), District Judge Billy Roy Wilson dismissed the lawsuit. This is a big deal and sends the message that big corporations with seemingly bottomless pockets shouldn’t use the justice system to trample on public dissent. Here’s a link to Bold Iowa’s press release. 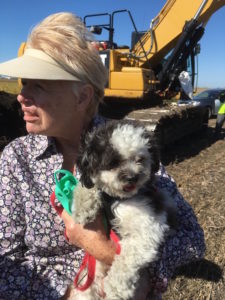 It’s a testament to Iowa pipeline fighters that Bold Iowa was named in the lawsuit eighteen times, and my writings about Bold’s work were referenced three times. The lawsuit made specific reference to our Bold Action Teams: “Bold Iowa organized and trained ‘Bold Action Teams’ (‘BAT’) which consisted of teams of five people who mobilize repeatedly to prevent construction until the point that the BATs were threatened with arrests.”

Thank you, ETP, for verifying that our campaign to slow down construction was effective.

Bold Iowa didn’t spend any money fighting the lawsuit, though we did invest time and effort responding to the suit. While I hope the court’s message is strong enough to discourage these kind of corporate lawsuits in the future, I’m proud of all the landowners, Native leaders, environmentalists, and farmers who have pushed back — and continue to push back — against ETP during the past four years. Chalk this one as a small but important victory for pipeline opponents and the First Amendment.

Clearly, our movement had quite an impact on ETP’s bottom line. At the same time, any American who values freedom of speech and the right to assemble should find it chilling that a huge corporation can use its financial clout to try to silence dissent through the courts. To the court’s credit, it understood this, and ruled in our favor.

Let’s hope the Iowa Supreme Court also rules in favor of the public good on the landowner / Sierra Club lawsuit.