Wow! Dakota Access’ hired security squad got caught cracking down on pipeline opponents in North Dakota without a license. Well, it looks like the situation in Iowa is pretty similar. Read the release below, and help us get it out to your local news sources, online networks, bathroom walls, and where ever else thinking people get their news.

To those who were planning to come to Rockwell City tomorrow for Heather Pearson’s trial, hang tight. The court has again moved the date. Now it’s July 6 and 7. And I hope to see you this Saturday for the big rally, concert and call to action featuring Gabriel Ayala at the Iowa State Capitol. — Ed 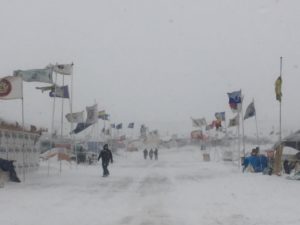 After it was revealed earlier this week that North Dakota officials refused to issue TigerSwan a license to operate in that state, Ed Fallon, the head of Bold Iowa and a former member of the Iowa House of Representatives, inquired with state officials as to whether TigerSwan might have been similarly negligent in Iowa.

“It was confirmed by IDPS that they received from TigerSwan an application requesting a license on November 28, 2016,” noted Fallon. “We know from reports released by The Intercept that TigerSwan was actively spying on pipeline opponents in Iowa at least as early as August 2016. The company’s license wasn’t approved until February 1, 2017, so TigerSwan should be charged with a serious misdemeanor. Dakota Access and its subcontractors have gotten away with one infraction after another. We’re going to do everything we can to hold them accountable on this. It’s like driving without a license. There are consequences for scofflaws who do that. There ought to be consequences for TigerSwan and Dakota Access, too. They aren’t above the law, though sometimes they act that way.”

Fallon has filed a Freedom of Information Act request with IDPS to obtain any and all information that might shed further light on communications between Department officials and TigerSwan.

“From everything I’ve learned so far, Iowa’s public officials acted responsibly and with impartiality,” observed Fallon. “I have every confidence they’ll provide any additional information in a timely manner.”

Fallon also learned that individuals working with TigerSwan must be credentialed by IDPS. Originally, there were only two or three credentialed employees. Yet that number jumped to 88 by May 2017.

“Yeah, that’s kind of incredible,” said Fallon. “I’m not sure why they needed a squad of 88 security personnel to crack down on a couple hundred pipeline opponents. I suspect we’ll get an answer as more and more details about this shadowy operation come to light.”

The Iowa Code Chapter relevant to licensing private investigative agencies and security agents is 80A.

2 Replies to “TigerSwan Operated Without a License in Iowa”