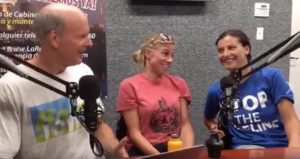 Jess and Ruby were livestreamed on the Fallon Forum on Monday.

I’ve had lots of invigorating conversations lately about the spiritual and moral impetus for civil disobedience. Much of that conversation was inspired by the resistance of Jessica Reznicek and Ruby Montoya, who recently confessed to damaging Dakota Access pipeline equipment. Check out our talk on this week’s Fallon Forum, and dialogue with Ruby and Jess face-to-face tonight at 7:00 p.m. at 1041 8th Street in Des Moines.

Leaving time for introspection has always been tough for me. How tough? Here’s a reflection I wrote about . . . well, about reflection . . . during the 2014 Great March for Climate Action. As always, feedback welcome. Thanks. – Ed 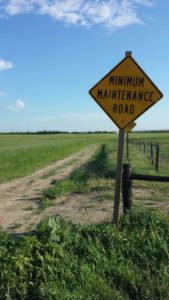 “With Steve gone, my marching day becomes increasingly contemplative. I often avoid the route Sarah and Anna have laid out and tack on extra miles to walk quiet roads or detour through small towns in search of a cafe with Internet service and large servings of bad food.

“Western Nebraska is sparsely inhabited but under-appreciated, exuding a wealth of sights, sounds and smells too abundant to catalogue. The lack of traffic liberates me from the fear that the next car or truck barreling past could kill or maim me. My focus shifts from survival to the alluring world around me — and to the even more alluring world within.

“Marching becomes meditation, my footsteps the mantra. I see the fields, ditches, trees, irrigation pivots, fence lines, homes and out-buildings. I hear the dog bark, the cow bellow for her calf, the cardinal sing to his mate, the warm breeze rustle the chest-high corn. I smell the white clover, the fresh-cut hay, the comfortable scent of horses, the acrid pungency of too many hogs. All this and so much more drifts through my senses in slow motion — visual, audial and olfactory b-roll, the canvas for the actual performance of life itself.

“My mind focuses on the repetitive, rhythmic crunch of shoes on gravel. It clears my head and brings a sense of peace. I recall the meditation course I took at age sixteen, the ten-minute introductory session inducing an unexpected inner calm that remained with me the rest of the day. Nothing bothered me — not the blackberry thorns that tore at my skin as I harvested the plant’s fruit; not my Mother’s nagging; not my brother calling me names for sport.

“Years later, after a long day hitchhiking through the French Alps, I settled for a bit high up in the mountains at a Buddhist monastery. Sitting for hours with the monks as they chanted “om,” the sound playing off ancient stone walls that once housed Catholic monks, I noticed how the mantra would roll through six or more unique tones in one recitation. 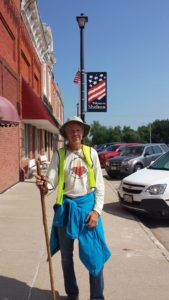 “Decades later on a work day during my campaign for governor, I thought about that experience as I made tiramisu at Cafe Dodici, an Italian restaurant in Washington, Iowa. The restaurant’s young, artistic chef showed me how to blend the egg yolks. “Watch how many different shades of yellow they go through, like 15 or 20,” he explained excitedly. “It’s awesome, as if you’re watching the universe unfold in a mixing bowl. But you’ll need some tunes to really bring it home,” he said as he flipped a switch sending rap music blaring through the kitchen.

“Om. Egg yolks. Footsteps. There are endless aids to center oneself on the path to enlightenment. But a mantra isn’t stagnant white noise. It’s alive, rich with motion and texture. My right heel’s first contact with gravel produces a deep tone. There’s a sudden decrescendo as the foot begins to roll forward. The pitch and volume rise as my weight shifts to the ball of the foot as the left heel moves into place and repeats the pattern. Every four steps, my walking stick punctuates the rhythm with a sharp sforzando as it grinds into the loose gravel. Right. Left. Right. Left. Right. Left. Seven million times . . .

“Like waves breaking on a beach, my footsteps roll through gravel, through Nebraska, toward infinity, toward eternity. At times like this, my mind seems to get it. The technique and purpose of meditation — directing the hungry soul toward the peace that comes with knowing one’s higher self — is so simple, so transparently important. Yet more often than not, my mind remains restless, distracted by both beauty and ugliness, unable to focus on the deeper truth that transports one beyond pleasure and pain.

“Forty years ago, my first meditation was a uniquely powerful experience. But life’s pressing demands lured me away from the pursuit of inner peace. Perhaps had I continued to meditate, continued to cultivate the balance that such practice brings, I’d be able to manage the March’s turmoil with more dignity. Perhaps meditating during my solo walks on backroads might yet help me deal with the challenges ahead. 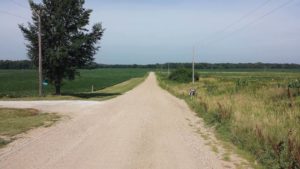 “A dog barks. I re-enter the world of the senses. What kind of dog is that? Is it on a leash? Does it bite?

“Will the cafe in the next town serve real butter?

“I hope I don’t run out of wet wipes today.

“I suck at meditation, even under the tutelage of a guru as patient as western Nebraska’s gravel roads.”