A few weeks ago, Lars Pearson and I were discussing the state of our country. Lars bemoaned the prospect of 3 1/2 more years of Donald Trump as president while I prognosticated that, within a year, the Tweeter in Chief will no longer occupy the White House. Our conversation ended with a friendly wager, one that Lars hopes I win.

Given the President’s response to the horrific events in Charlottesville, I’m inclined to move up the date of his premature departure. Most business and political leaders, even those in his own party, condemned the President’s remarks. Exceptions included Iowa congressmen Rod Blum and Steve King, who offered nuanced statements that belie their sympathy with the alt-right crazies. (See Kathie Obradovich’s column for details.)

So much quality commentary has been shared about Charlottesville, it’s hard to know which to recommend. If you’ve got just a couple minutes, I’d suggest this brief but powerful statement by my cousin, Jimmy Fallon. (Yeah, all Fallons are related, having crawled out of the same bog in southern Roscommon County, Ireland.)

A man or woman can’t serve effectively as president if he or she loses the trust of the American people. America’s confidence in Donald Trump was shaky to begin with. With each new offensive statement, tweet and proposal, that confidence erodes even further.

Yes, the end of the Trump presidency is near. For that, a growing majority of us are increasingly grateful.

But wait! Another end is near, relevant to climate change. This end is so delicately poised it could go one of two ways:

(1) Our rapidly-warming Earth arrives at that tipping point long predicted by scientists, where cataclysmic disruptions severely alter life on our planet. Many people will die, especially front-line communities least responsible for causing the problem. Those who survive will have no choice but to adapt. The pain will be prolonged, but humanity will be dragged kicking and screaming into a challenging but sustainable future.

(2) A different historic tipping point is achieved. Americans wake-up to the reality that we face an existential crisis like no other. The nations of the world launch the all-hands-on-deck, full-scale mobilization advocated by The Climate Mobilization. We mitigate the damage and destruction through preparedness, innovation and cooperation, arriving at that sustainable future with a lot less pain and suffering. 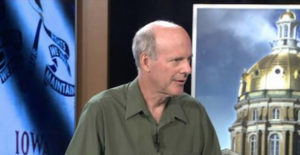 I’m opting for the second tipping point, and my life for the past decade has been committed to helping birth that reality. (Here’s my recent appearance on The Insiders with David Price.) Honestly, I’m surprised we aren’t there yet, given the growing number of climate indicators:

* Nearly every year sets a new record for warmest ever.

* Ice and snow in the Arctic, Antarctic and Greenland are melting at alarming rates.

Yes, this end is near too. Just as we’ll survive Trump’s presidency, abbreviated or otherwise, we’ll survive climate change. But the longer we wait to mobilize, the uglier it’s going to get. That’s a reality none of us want to see.

Especially, let’s convince our leaders to act NOW. School board and municipal elections are coming up. Next year’s midterm primary election is just over nine months away. Act now. Act boldly — in the streets, in the fields and in the voting booth.