All successful movements are built on a foundation of failure interspersed with moments of incremental progress. It’s important to recognize the seeds of climate action sown in the past. But with only eleven years to transform our world to keep global warming below 1.5° C, we’re beyond incrementalism. An all-out mobilization to fight climate change is all that can save us.

Who better to lead the fight than children and young adults — those who will suffer the consequences of our fossil-fuel addiction well into the 21st century and beyond. Tens of thousands of young people across the world have stepped forward to demand action. School Strike for Climate is one vehicle to further grow the movement.

But, “Shouldn’t those kids be in school?” you ask. Greta Thunberg, the 16-year-old Swede who skipped three weeks of school to protest in front of the Swedish Parliament, responds, “If you think that we should be in school instead, then we suggest that you take our place in the streets, striking from your work. Or, better yet, join us, so we can speed up the process.”

School Strike for Climate‘s website reads, “We, the youth of America, are striking because our world leaders have yet to acknowledge, prioritize, or properly address our climate crisis. We are striking because if the social order is disrupted by our refusal to attend school, then the system is forced to face the climate crisis and enact change. We are striking for the Green New Deal, for a fair and just transition to a 100% renewable economy, and for ending the creation of additional fossil fuel infrastructure.” 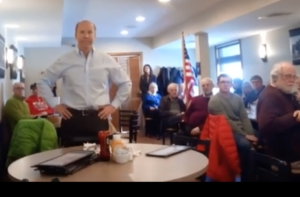 Yes, we are running out of time. Young or old, get involved! Strike from your school or job. Lobby relentlessly until our elected officials listen. Practice non-violent civil disobedience. My preferred strategy at this time: Join Bold Iowa’s Climate Bird Dogs to compel the presidential candidates to prioritize the climate crisis as the urgent, existential threat it is.

Through all of human history, there has never been a crisis such as what we now face. We have to look beyond the immediate challenges of our daily lives and focus on the frightening reality that life on Earth is in jeopardy. As Greta says, “[E]veryone keeps saying climate change is an existential threat and the most important issue of all, and yet they just carry on like before. I don’t understand that, because if the emissions have to stop, then we must stop the emissions. To me that is black or white. There are no gray areas when it comes to survival.”