Walking to Paris to spur a global climate mobilization
Two Americans who walked across U.S continue on to Paris

On November 11th (Veterans Day), two Americans who last year walked across the U.S. for action on climate change will set-out from the coast of Normandy, France, walking over 200 miles to arrive in Paris on November 28th for the start of the United Nations Climate Summit. The Summit is seen as pivotal if the nations of the world are to take effective, timely action to address climate change.   The walk is being conducted in cooperation with The Climate Mobilization, a national movement calling for an economic transformation to fight climate change on the scale of the World War-II home front mobilization. 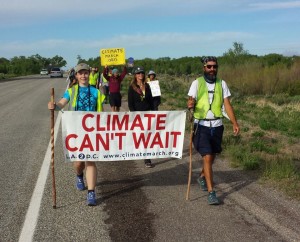 In 2014, Ed Fallon of Iowa and Steve Martin of Kentucky walked over 3,000 miles across the United States with the Great March for Climate Action.

For Fallon, starting the Walk on the coast of Normandy on Veterans Day has deep personal significance. “My Dad was a kid during World War II, the son of Irish immigrants growing up in New York City. He told me stories about how, for the longest time, the United States ignored the atrocities being committed in Europe and in the South Pacific. Yet finally, everyone got involved, including my Dad, who used to go down to the railroad tracks and collect the tinfoil from cigarette boxes. That was his contribution to the war effort.”

Martin was deeply moved earlier this year by Pope Francis’ encyclical on climate change. “For me, this a pilgrim’s walk,” said Martin. “Making footsteps is an age-old practice. It links our common spirit to the change we hope to see, and in the end, I believe the human heart will triumph.”

Fallon and Martin will average about 12-15 miles a day. They will travel very simply, carrying their gear and staying either in hotels along the route or with people who offer them hospitality.