Can we finally agree to banish the term “moderate” from America’s political lexicon? As Robert Reich writes in a recent column, The Real Divide, “Today’s great divide is not between left and right. It’s between democracy and oligarchy. There are no longer ‘moderates.’ There’s no longer a ‘center.’ The most powerful force in American politics today is anti-establishment fury at a rigged system.” 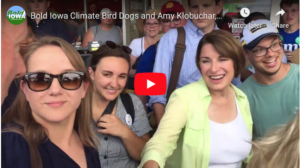 Click on image to see video of Amy Klobuchar avoiding a pipeline question.

That brings us to Sen. Amy Klobuchar, one of the so-called “moderates” the Establishment considers an acceptable replacement to Joe Biden, who continues his downward spiral toward political irrelevance.

Klobuchar’s pitch to Iowa Democrats — that she’s one of us, our friendly neighbor to the north, a pragmatist who can reach across the aisle — rings hollow on many fronts. Her pitch especially fails when it comes to climate change.

At a meet-and-greet in Iowa Falls last May, Klobuchar responded to a question from Bold Iowa’s Samantha Kuhn (Click here to watch response). Klobuchar said, “We need to greatly reduce our dependence on fossil fuels, and eventually we won’t need these pipelines if we do that in the right way — or we’ll need them in a limited way. Because I think for quite a while we’re going to see the use of gas and the use of oil, and so we’re going to continue to have some of that going on for many years in the future.”

Read between the lines! Klobuchar doesn’t say we need to get off fossil fuels. She says we need to reduce our dependence on them. She sees continued reliance on oil and gas pipelines for quite a while and for many years in the future. She throws out the expected progressive sound bites on climate. But when pushed on specifics, it’s clear her allegiance is to the fossil-fuel industry, not to the imperative for immediate climate action on the timeframe dictated by science.

Since that interaction with Bold Iowa last spring, Klobuchar has gone out of her way to avoid tough questions on the Dakota Access Pipeline and Line 3. Nearly every other candidate Bold Iowa’s bird dogs have questioned is opposed to doubling the flow of oil across Iowa. 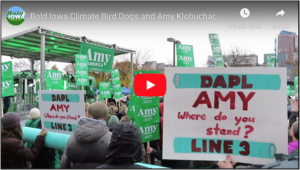 Click on image to see video of Bold Iowa’s action at the Liberty and Justice Celebration.

Before the start of last Friday’s Liberty and Justice Celebration at the Iowa Events Center, Bold Iowa painted two simulations of an oil pipeline and made signs reading, “Amy, Where do you stand?” Six of us made our way to the front of Klobuchar’s parade and then to the entrance to the building, hoping she would finally provide a straight answer. She didn’t.

Iowa Democratic caucus goers want climate action. And Iowans across the political spectrum opposed construction of the Dakota Access Pipeline. Klobuchar’s refusal to stand with us is a potential nail in her political coffin. She knows it, but she can’t hide her support for oil and gas pipelines.

After all, she was one of only two 2020 presidential candidates to accept money from Enbridge project manager Robert Kratsch. The other candidate was Donald Trump. This summer, after much public pressure, Klobuchar returned the $5,600 she received from Kratsch. But why did she accept it in the first place? And why would a pipeline proponent who also donated to President Trump find Klobuchar worthy of his largesse?

Yes, that’s a rhetorical question. The simple answer is: Klobuchar supports building oil and gas pipelines. As such, she is no climate champion. Iowa Democrats need to look elsewhere if they want a president who will seriously tackle the climate crisis and stop the reckless build-out of fossil fuel infrastructure.