Check out this week’s Forum, where Charles Goldman and I discuss:
(01:48) New Zealand takes huge climate step forward;
(14:19) Trump getting help from Ukraine reminds one of … Nixon and Reagan;
(31:16) Walk to Paris for Climate Action began four years ago today;
(44:41) Iowa Caucus update. 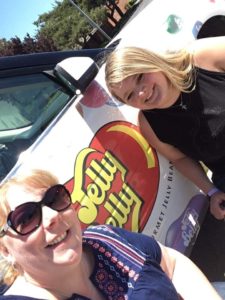 Kendra Walters is a friend from western Iowa who has spent many summers in Paradise with her family. A year ago, the worst wildfire in California history devastated Paradise. Kendra has shared with me her family’s perspective on that trauma, and regularly updates me. Here’s a bit of what she’s shared:

“The day it happened, mom texted me that Paradise was on fire and my sister and everyone was evacuating. I couldnt believe it. I cried and my heart raced for my family and their safety. I checked social media and found videos and photos of how the day turned to night. I remember thinking, ‘How could this happen to my family?’ The worst part was the waiting to see if anyone I knew died and if my family was okay. 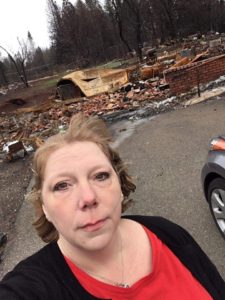 Jennifer Roberts and the remains of her home.

“My niece, Sarah, wrote to me recently: ‘A year ago today, I woke up at 9:00 a.m., and when I walked outside my stomach dropped. It was pitch black. By 9:15, I had gathered a duffle bag of clothes and a small box of random keepsakes. I got into my car and noticed it was low on gas. As I pulled out, I could see that the fire was way bigger than they were letting on.

“‘Traffic was bumper to bumper. I called my mom and told her to leave the house. I soon realized there was zero chance of getting gas and I prayed I wouldn’t run out before I got to safety. Fifteen minutes later my mom called and told me our yard was on fire. I felt like the world was ending. I parked, sobbing in traffic, got out, and threw up.

“‘Then I realized the sides of the road were catching fire. Everything was on fire. Explosions from buildings were throwing large chunks of debris at my car and it was so hot it felt like an oven.

“‘Then traffic stopped. The fire was so bad that both sides of the road were fully ablaze and covering the road with flames. I touched my window and the glass was so hot it burned my fingers. I called my boyfriend in case it was the last time I heard him talk. He tried to keep me calm, but I could hear he was scared, too. I screamed for traffic to move and honked and begged the drivers to start moving. I sobbed as I sat in the flames and realized I might not make it out.

As the Camp Fire scorches a community in Northern California, residents leave by car and on foot. Their journey is captured on harrowing cell phone videos.Tune in or stream "Inside the Megafire" tomorrow night (May 8) at 9/8c on PBS: https://to.pbs.org/2H43lLb

“‘After what seemed like a lifetime we finally started moving. I finally reached safety, and as I pulled over my car ran out of gas and died. It had taken me four hours to evacuate and I had done it on a near-empty tank of gas.

“‘As much as I know I’m blessed that my family survived, I miss my home, my friends, my community. I feel a huge hole where my old life used to be. But slowly I’m building a new one and becoming a stonger, better person. I will rise from the ashes because I am #paradisestrong.’

“That’s what my niece wrote to me just recently. I feel such a strong urge to do more about climate change and to help my family and Paradise. Over time, I’ve seen personally how climate change is more than just about physical impacts. It’s about psychological impacts, too.

“My grandma Jean died last month. She was my last living grandma and survived the Paradise fire. They think her Alzheimer’s was accelerated because of the fire. Her obituary says, ‘The trauma Jean experienced because of the fire led to a rapid decline of her health.’ So for me, climate change is not just about floods and droughts and fire. It’s about human health and well being, and I feel it very deeply and personally.”