Pop quiz: Who represented western Iowa in the US House in the 1970s and ’80s, before Steve King (darling of white supremacists) dominated half of rural Iowa for 18 years?

Answer: Tom Harkin and Berkley Bedell — both progressive Democrats, and the political antitheses of King. 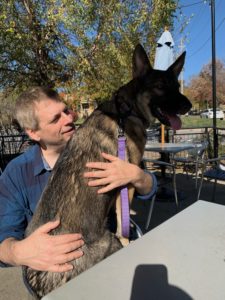 Joel Brown with his dog, Noa.

So, what changed? I recently discussed this and much more with Joel Brown, a former Iowa Democratic lawmaker who represented Lucas, Wayne, Monroe, and Clark counties from 1988 to 1992.

Joel’s interest in politics is driven by two key passions: decentralizing the economy and freedom of speech. “The first speech I gave as a lawmaker was on a bill to extend First Amendment protections to student newspapers, protecting students from school administrator censorship,” Joel told me. “In my mind, that’s a big part of what the Democratic Party was all about.”

Joel feels the Democratic Party has abandoned not only the First Amendment but also the working class. He sees it, to a large extent, as the Party of the affluent.

In 2016, Joel voted for Donald Trump, saying, “Trump made a connection with the working class. His renegotiation of NAFTA, which I’m totally against, made the trade treaty better than it was. Trump was speaking to a lot of what blue collar workers are eager to hear, and the two major parties aren’t doing that. Also, Trump didn’t expand the Patriot Act, which has been a massive assault on privacy and freedom of speech, and he didn’t get us into any new wars.”

“It wasn’t that I thought Trump was wonderful,” Joel says. “It was more that I disliked Hillary Clinton. What we have today are two big-government parties. Both want to consolidate power. If Nancy Pelosi really cared about poor people she wouldn’t have a $24,000 refrigerator in her house.”

I ask Joel if he could have supported any of the Democrats running for president in 2020. He says, “Tulsi Gabbard. She’s what a Democrat should be. Gabbard doesn’t seem to hate the opposition. She says we can disagree and not be enemies. She’s also been outspoken about freedom of speech, and that’s an impulse I don’t see in the Democratic Party any more.”

We talk about climate change, too, and Joel says, “I know we’re going to hit peak oil sooner rather than later. It’s going to force us to scale back the industrial economy to an economy where everything, especially food production, will have to be more local.”

Joel points out that traditional farming techniques use much less energy and are far more efficient than often believed. Speaking from his experience as a small-scale farmer in southern Iowa years ago, Joel says, “Chickens following livestock helped spread the manure and fertilize our land, for example. You can do that kind of farming without a lot of fossil fuel. Our modern agricultural system right now is basically a component of the oil industry.”

Though he often votes third party or for Republican candidates, Joel remains a Democrat. I ask if he’s considered joining the Libertarian Party. “No, I don’t agree with the Libs’ overall philosophy. I don’t want to see everything privatized. I want more things localized, not privatized. Both main parties are interested in centralization. When it comes to candidates who understand and support decentralization, there usually aren’t any good choices on the ballot. But with Trump, at least I felt that he was not part of the political establishment.”

I ask Joel where he gets his news from, and he mentions Blaze and Zero Hedge. “I don’t like Rush Limbaugh, Sean Hannity, or Mark Levin,” he says. “I don’t watch TV news, including Fox. My sources are pretty random, mostly leads I pick up from folks I follow on Twitter.”

I’ve known Joel a long time. He’s a friend, a neighbor, and a fellow survivor of the Iowa Legislature. He’s neither a racist nor a misogynist. Nor is he stupid. I wish I could light a fire under him on the urgency of climate change. I’d also like to see him rethink his support for Trump, who I regard as the most dangerous man ever to set foot in the White House.

That said, maybe the Left has something to learn Joel and other voters like him, who are often disparaged, even canceled, by the Woke Police. As Joel said to me wrapping up our conversation, “You look at cancel culture and see what happens to people who criticize the dominant narrative. They get crushed. Sometimes they get fired.”

Of course, sometimes said offender deserves to be fired. But too often, we’re inclined to shout down opposing views rather than accept everyone’s right to be heard. For the sake of our democracy, I hope for greater tolerance across the political spectrum.