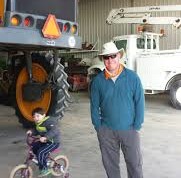 Steve Martin, taking a break from the walk in the machine shed of pipeline opponent Randy Sieren, as Randy’s grandson speeds by on his bike.

Yesterday, nearly every landowner that I spoke with along the route was against the pipeline. Today did not go so well. I didn’t find as many people home, and three of those I talked with said almost the exact same thing: “It’s not coming through my property, so I really don’t care.”

No matter what I could have told them, those folks weren’t going to give a darn about fossil fuel’s impact on the climate. They would have shrugged their shoulders in indifference had I told them that an oil spill would ruin Iowa’s drinking water. Instead, I pointed out that, if the pipeline running through their neighbor’s land broke, it could easily contaminate their own land and water as well. In one case, that argument resonated, a bit. 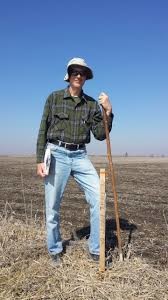 A stake marking the pipeline path where it would cross some of the flattest, most fertile farmland in the world.

It’s discouraging to encounter such crass disregard to the problems of the world beyond the boundaries of one’s own property line. I have to remind myself that in any movement for social and political change, the majority of people never get engaged. Even in the most vibrant struggles – e.g., women’s suffrage, civil rights, Keystone Pipeline, etc – it takes the involvement of only 10-20% of the population to bring about meaningful change.

The fact is, I’ve met a lot more people who are opposed to this pipeline than who are for it. Continuing to build a broad, well-organized coalition that strengthens communication among pipeline opponents, and that deepens their level of involvement, is critical. I see that happening. And though all of us fighting to stop the pipeline will have days like today, we must remember that every step forward is more productive than standing still.

Today concluded with a side excursion to Washington, Iowa, where I did a radio interview, enjoyed dinner with a dozen friends at one of the best Italian restaurants in Iowa, Cafe Dodici, spoke to about twenty Washington County Democrats, and had an enjoyable overnight stay at the home of friends. So, yeah, today I met three apathetic people and two dozen who are ready to do their part. Life is good.