I’m not unfamiliar with Iowa agriculture, but what Randy Sieren taught me today was beyond my previous experience. Randy farms 4,000 acres north of Ottumwa on some of the richest, flattest ground on the planet. Last year, he finished a seven-year project to “pattern tile” his land at a cost of $1,000 per acre. Randy’s carefully-mapped GPS analysis of every square foot of his cropland indicates the new tiling system is increasing productivity by as much as 30%. The investment will pay for itself within 10 years. 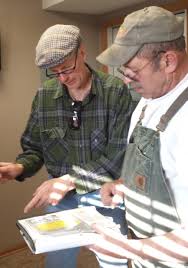 Well, that is, unless Kelcy Warren gets his way and runs an oil pipeline through nearly two miles of Randy’s cropland.

“That pipeline’s going to destroy what we’ve done,” Randy told me as we talked in his machine shed, and later that evening at the Community Center in Fremont. To assure the most efficient drainage, Randy runs tile every 50 feet. Warren’s company would have to break those tiles in order to install the pipeline. The company promises to splice them back together when they’re done.

But Randy and the landowners he rents some of his land from are not buying it.   ”It’s going to be like sticking your fork in a noodle bowl,” offered Randy. “That tile is like a plastic slinky, and their track hoe is going to dig into the ground and just grab it. And the ground around the pipeline will settle and sink, and my tile is not going to drain once that happens.”

Randy and his neighbors are not unfamiliar with developers ruining tile, and then doing a lousy job trying to repair it. Another farmer I met today told me that nearby along Highway 163, when that road was widened about 15 years ago, the tiling was disrupted and has never worked well since.

A lot of farmers and landowners I’ve met who are opposed to the pipeline are smaller operators. Randy’s got a big, modern, high-tech farm with a lifetime of labor and investment sunk into the soil and into equipment. He tells me there’s nothing right or fair about a billionaire with political clout being allowed to come in and destroy what it’s taken him so many years and so much money to perfect.

As I walk north and west toward flatter country, Randy suspects I’ll meet a lot of farmers like him, farmers who’ve invested in state-of-the-art tiling systems and whose land and livelihoods will be hit hard if this pipeline goes through.