Every day of this walk, I meet people who share strong testimony against the pipeline. Often, this face-to-face testimony is supplemented with material sent to me electronically. Here’s a short video I received that every Iowa farmer should watch: Corn farmer’s crop still deficient 51 years after pipeline installed.

Walking north of Rockwell City today with Marcy Burkhead, we meet Shirley Gerjets at the first house we stop at. Shirley is feisty, and as solidly against the pipeline as anyone I’ve met. “My kids tell me not to get so worked up about it, but I can’t help it. I’ve worked all my life for what we’ve got.”

She points north and east, naming one neighbor after another who is against the pipeline. “I hope everyone is as mad as I am, because to tell you the truth, I told those guys to go to hell.” 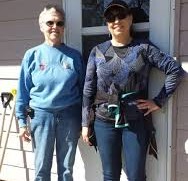 See what I said about feisty!

Shirley learned about the oil spill two years ago on a wheat farm in North Dakota. That helped fire her up. Tesoro Corp. – the company responsible for the spill – is still working to clean up the mess left by 865,200 gallons of oil covering an area the size of seven football fields. Tesoro originally estimated the clean-up cost at $4 million. It’s now $20 million, and it will be at least another year before the work is complete.

As I read the Associated Press article on the North Dakota oil spill, so many things stood out as warnings for Iowa farmers who might be lured by the dollar signs dangled before them by Dakota Access. In particular, this bit of information floored me: “It was almost two weeks after {the farmer} reported the spill that state officials told the public what had happened, and only after The Associated Press asked about it.”

Really? It took state officials two weeks to tell the public about the spill?! I guess I shouldn’t be surprised, given the extent to which both federal and state government have become more and more inclined to secrecy.  As a lawmaker, I once attempted to attend a closed-door meeting of the Iowa Values Fund “Work Group” – a hand-picked subcommittee of lawmakers in favor of the Fund who met in secret to discuss how to spend $500 million of Iowa taxpayer money.

What happened when I stepped into the meeting room? The Work Group chair had me thrown out!

Things have gone from bad to worse when it comes to secrecy in government. On two occasions recently when I’ve called the Iowa Utilities Board asking for information, they’ve told me to call the pipeline company!

So, given how lacking in transparency the legislative and administrative branches of state government have become, do I think what happened in North Dakota – where the public wasn’t told of a huge oil spill until the Associated Press broke the story two weeks later – could happen in Iowa? Absolutely.

And as Shirley points out, even if state officials are forthcoming about a spill, “The pipeline company is only required to post a surety bond of $250,000 – for the entire state of Iowa! If they seriously think that’s going to clean up anything, that’s ridiculous.”

There’s still time for the Iowa Legislature to tighten eminent domain law to prevent landowners from having their property condemned for an oil pipeline. Lawmakers also should reassure people like Shirley by requiring a pipeline company to post a surety bond that begins to cover the true costs of a clean-up.

Tune-in to hear Ed talk about the latest developments on the Iowa Pipeline Walk on the Fallon Forum on Monday, April 6 at 11:00 a.m. on KDLF 1260 AM La Reina (Des Moines) and online. State Rep. Dan Kelley hosts the program, and his other guests are: Dale Moser with Megabus, discussing the environmental benefits of bus travel; Mary LaHay of Iowa Voters for Companion Animals with an update on legislation on puppy mills; and Erika McCroskey with Catholic Peace Ministry, talking about the Bishop Dingman Peace Award.

{Correction: In the Day 26 Blog, I had it backwards: Kendra owns the Leader and Amanda works at the Review.}