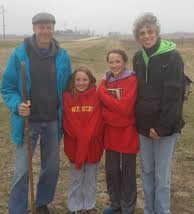 Ed with Faith Blaskovich and her granddaughters, Frankie and Sadie

I am joined today by Faith Blaskovich and her two delightful granddaughters, Frankie and Sadie. The girls manage the entire 12-mile trek with me, with nary a whine nor whimper.

Mile after mile of empty fields and often empty farm houses can be lonely hiking conditions. So it is nice to have company on today’s walk. And it will be nice to have hundreds of you – yes, hundreds! – join me for a celebratory rally on the completion of the walk!

Here’s the lowdown on that, in press release format. Can you do three quick things to help?:

3. Forward a copy to your local media contacts.

Here’s the press release that went out today. Thanks to all of you who have helped make this walk a success through volunteering, donating, walking, and more. And thanks to David Goodner for initiating the idea of the rally and getting the ball rolling.

On the morning of April 22 on the Big Sioux River in Lyon County, former State Rep. Ed Fallon will conclude his eight-week, 400-mile walk along the proposed route of the Bakken Oil Pipeline. This accomplishment will be celebrated with an Earth Day Rally to Stop the Pipeline on Wednesday, April 22 at 5:00 p.m. on the State Capitol’s west lawn (popularly known as “People’s Park”), at the intersection of Locust and E. 7th Street in Des Moines.

The focus of the rally is to:

– Celebrate Earth Day and the completion of Fallon’s 400-mile walk.
– Demand that the Iowa Legislature take swift action on eminent domain.
– Launch a major new initiative in the effort to stop the Bakken Oil Pipeline.

Fallon will be joined by local supporters and by Iowa landowners he met during the walk.

“The Iowa Legislature must, during this session, pass legislation preventing the use of eminent domain for an oil pipeline,” said Fallon. “I’m asking all able-bodied Iowans of conscience who are free from work duties and other obligations to join me at the State Capitol and unite our voices to send the strongest possible message and demand action.”

Fallon has been walking across Iowa for the past five weeks along the proposed path of the pipeline. He will finish his walk in Lyon County on April 22 before driving back to Des Moines for the 5:00 p.m. rally. He has met hundreds of Iowans opposed to the pipeline during his travels and will bring their stories with him to the State Capitol.

Fallon says he also will make a big announcement at the rally about his future plans and his vision for what needs to happen next in the movement to stop the pipeline.

“In addition to calling on the Iowa Legislature to pass a strong eminent domain bill, I’m preparing an announcement at this rally about a significant initiative to advance efforts to stop the pipeline,” concluded Fallon.

The Earth Day Rally to Stop the Pipeline is co-sponsored by Climate Action NOW! and American Friends Service Committee.