As a Christian, Easter Sunday has always been a big day for me. This year, it will be bigger than usual, because I will turn exactly the age of the average Iowa farmer: 57.1 years old. 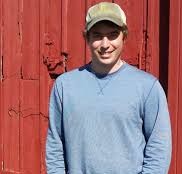 Yup. Almost hard to believe, but if I were making a living as a farmer today, I’d be a wee sliver on the young side of average.

Indeed, most farmers I’ve met on the walk are on the upside of 65. So it was refreshing today to meet Thomas Burkhead. At 27 years old, by farmer standards, Thomas is practically a newborn. He spends most of his time working at Grade A Gardens in Johnston, providing food for 100 families on a weekly basis during the growing season. “If it grows in Iowa, we’re growing it,” says Thomas.

Thomas makes regular trips back to his family’s fifth-generation Calhoun County farm, where I stay tonight with him and his mom, Marcy. Thomas cooks up a wonderful dinner of mostly Iowa-grown products. The conversation is as rich and satisfying as the food itself.

The pipeline would run within a half mile of the Burkhead’s home place. “One minute of leaking would be equivalent to two tanker trucks spilling,” says Thomas. “Everything’s tiled around here, so the oil would get into the tiles and could go for miles. Furthermore, I’ve talked with people who install tile, who say it’s really hard to repair it once it’s been cut.”

Thomas is “accepting of all forms of agriculture,” but his heart is with the local-foods movement. He feels an oil spill would be particularly devastating to organic farms. “I read about a farm along the Yellowstone River,” he said, reflecting on the huge spill in Montana earlier this year. “That farm raises organic vegetables, and has goats on pasture. They’re getting the run around from Exxon, and they don’t know if they can remain certified organic.”

I ask Thomas how other landowners and farmers in the area feel about the pipeline. “Most of the neighbors I’ve talked with are against it,” he replies. “But most of them feel it’s a done deal, like they don’t have a say.”

And that, I believe, is one of the main challenges we face. These days, whether it’s a big oil company or a big government agency throwing it’s weight around, many people feel they no longer have recourse. They feel hopeless, voiceless, disenfranchised. With the growing clout of money influencing what happens in politics and the economy, it’s hard to blame them.

But again and again, I come back to the reality that organized people, armed with truth in defense of a just cause, can and often do beat big money and big government. It takes time. It takes determination. It takes numbers. And it takes patience.

This is a critical element of the message I will continue to preach as I weave my way north and west along the final 150 miles of the Iowa Pipeline Walk.