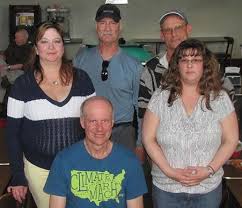 The proposed Bakken Oil Pipeline weaves a path that avoids Iowa’s cities and towns. Consequently, my encounter with most communities is to admire their grain elevator from one or more miles away.

The exception is when I’ve got a community meeting. Today, I rush through the last 5 miles of my walk to get to Dayton in time for a gathering at the town’s community center. Compared with many rural communities, Dayton is robust, boasting a slew of business-types that abandoned most Iowa towns long ago.

Yup!  The small town of Dayton has two newspapers! Reporters from both the Dayton Review and the Dayton Leader were at tonight’s public meeting, as was Bill Shea with the Fort Dodge Messenger.

Prior to the meeting, I sat down over dinner with Amanda DeVries of the Leader and Kendra Breitsprecher of the Review. Their relationship is not some hot, competitive cross-town rivalry. No angry glares were cast across the table. No food was thrown. As far as I could tell, the two were best of friends.

I know, in a world dominated by sensationalism in the media, kinda disappointing, isn’t it?

Kendra is spunky, outspoken. Brash even. And although the rapport between her and Amanda is amicable, there’s still some friendly competition. Says Kendra, “If you want tradition, the Review is your choice. If you want quality writing, a true commitment to the community, and consistent coverage using all sorts of technology, the Leader is for you. We’re all about family and community.”

Kendra points out that the owner of the Review doesn’t live anywhere near Dayton. “{He} and I would have been throwing food,” she says.

Amanda echoes the competitive nature of the relationship: “I look to Kendra as a competitor, yes, but her kids are older than mine, and I would be comfortable asking her ‘mom’ stuff.”

There’s lots of great, detailed conversation at the community meeting, including some pointed questions for me and other anti-pipeline attendees. One gentleman playfully tries to trap me into admitting that I trespass (which I don’t – I’m always meticulous about staying on the public roads). He declares that if I come on his land he could have me arrested. I respond, “Or you could save us both time and just grab your shotgun. But really, why would I want to follow the exact path of the pipeline when I’d end up covered with mud and only meet a bunch of squirrels.”

He laughs a bit, and after the meeting we shake hands and exchange a smile.

In Webster County, the public’s view of the pipeline is mixed. I met a farmer who was happy to have sold an easement. We talked for about 20 minutes while sitting in his gator as he took a break from picking up rocks in his fields. “I will say this,” he admitted. “I was about 90% certain this pipeline was going through. Now, I’m less confident.”

Well, that’s music to my ears! I inquire about why he feels that way, and he says, “Well, all I can tell you is that, more and more, I hear a lot from those who are opposed. A lot of people seem to be against it.”

After the meeting, Amanda assures me that she now has a stronger sense that there is opposition in Webster County.

This is good news. It fires me up to continue my walk to its Earth Day conclusion. It should fire-up all of us to press forward – talking, writing, studying and speaking out!