Since the Great March for Climate Action in 2014, I’ve fielded at least a half dozen enquiries from climate activists interested in another coast-to-coast march. Hannah Bacon is the first person to actually take a shot at it. Setting out from San Clemente, California, last month, Hannah is now approaching New Mexico. I’m confident she’ll go the distance. 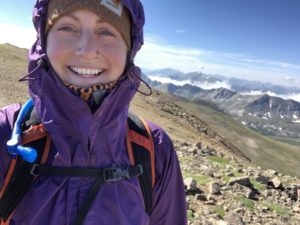 In addition to Hannah’s climate outreach along the way, she’s raising funds for the Sunrise Movement. Hannah blew past her goal of $10,000 before she even left California, and has now reset her target at $20,000.

Portions of Hannah’s route, including the Mojave Desert, overlap the path of the Great March for Climate Action. Earlier this month, when Hannah arrived at The Glass Outhouse at the edge of the desert, several people told her it was too dangerous to cross the Mojave alone. They advised her to skip that 100-mile stretch and take a ride.

Hannah gave that advice serious consideration, then called to get my take. I told her that, while concerns about her safety were legitimate, she’d regret taking a ride and should try to find a safe way to make it across, perhaps with a walking companion.

She reached out to the local environmental community, and sure enough, an experienced desert hiker agreed to join her. The two made it across in five days, which amazes me since it took our March nine days. On top of that, I should point out that Hannah is carrying all her gear, food, and water whereas we had the benefit of a gear truck and mobile kitchen.

Since the Mojave, Hannah has been blessed with many displays of kindness and hospitality — camping at a retreat center, a Greek Orthodox monastery, an urban farm in Phoenix, and at many private homes. There have been hardships as well, of course:

A crippling case of blisters after the first day’s march due to inadequate shoes.

Portions of her route blocked by wildfire damage, requiring a thirty-mile reroute.

Also on this week’s program, Charles Goldman and I discuss why Democrats have lost rural America and working-class voters. We then scratch our heads in wonderment at how Iowa Governor Kim Reynolds has dutifully followed President Trump down the rabbit hole. I share concerns about how, for some vegans, the anti-meat crusade has become an anti-local crusade. Finally, Kathy Byrnes shares her New Year’s resolution: waste less and want less.

Thanks for checking out this week’s program (links below). Again, please support Hannah Bacon in her climate march across the US.