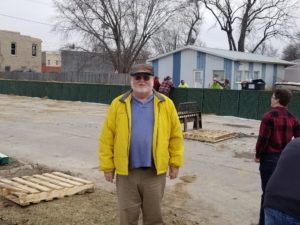 If President Trump were, instead, Governor of Nebraska, perhaps he’d build a wall along the right-descending bank of the Missouri River to keep immigrants like John Davis from sneaking across the border.

John is one of many southwest Iowa residents punished badly by last month’s historic flood. He’s sorting out how to adapt: “As soon as I get my 90-year-old mom moved, I’m going to box-up what’s left so I can move, too. With my home destroyed, there’s just nothing left for me in Hamburg.” 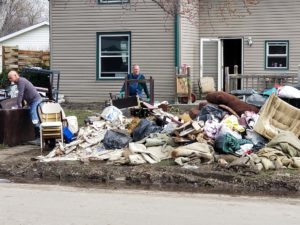 The pile of destroyed belongings in front of John’s neighbor’s home. “I’ll have twice that amount, representing most of my life,” says John. “I’m looking at a $60k loss.”

John will probably relocate to Council Bluffs. In the New Climate Era, any town with the word “Bluff” in its name is probably a safer bet than living in a floodplain, low-lying coastal community, or fire-prone area out West. Unlike President Trump, John understands that climate change is real. He’s been talking about its inevitable impacts for years. Now he’s a victim.

Unfortunately for John and others, the government’s response has fallen short. “I’m not getting any help from FEMA,” says John. “They sent me a denial letter, reasoning that I can still stay in parts of my house and that I have flood insurance. FEMA sets up programs to give people hope, then crushes them with denials. I’m hopping mad.”

Want to lend John a hand? “Money will help, but people’s activism is more important to me,” writes John. That level of altruism is commendable. Still, John could use our help. Join me in pitching in here.

It’s impossible to know how many flood, fire, and food-shortage refugees there will be in the New Climate Era. Tens of millions will likely come from within our own borders. John Davis represents the growing tip of that iceberg.

Not that America needs another wake-up call, but last week, the World Meteorological Organization (WMO) released its State of the Global Climate report: “The increasing number of natural disasters and dangers linked to climate change represents ‘another strong wake-up call’ to the world, UN Secretary-General António Guterres has said.” (Click here for full story.) 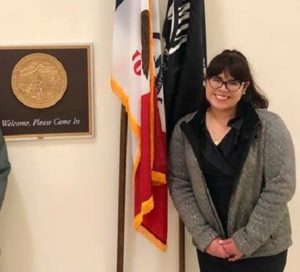 America Duran lobbying in Washington DC. She came to the US as a young child and has been living in Iowa ever since.

Climate change is the crisis that affects everything. EVERYTHING. It’s already impacting immigration. On the Fallon Forum this week, we dig into that subject with Jon Krieg of the American Friends Service Committee (AFSC) in Des Moines, who fills in as guest host. Jon writes, “America Duran, a young immigrants’ rights advocate, joins me on the program to report on her lobbying trip to Washington, DC. She joined hundreds of young people from around the US at a spring lobby weekend organized by the Friends Committee on National Legislation.

“We also talk with Erica Johnson, who directs AFSC’s Immigrant Rights Program in Des Moines. We discuss where Iowa’s members of Congress stand on immigration and how you can get your voice heard by elected officials. Finally, we look at legislation at the state level and what’s being done among faith communities to build the Sanctuary Movement.”