What lousy timing! I went to bed last night with the onset of a sinus infection. My night’s sleep was dismal, and the transport of mucus through my nose comparable to the volume of oil Kelcy Warren hopes to move through one of his pipelines.

I start the day feeling weak but determined to finish the final stretch of this walk. Furthermore, big things are brewing relevant to the public actions around the Climate Summit. 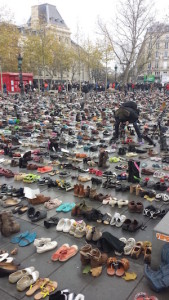 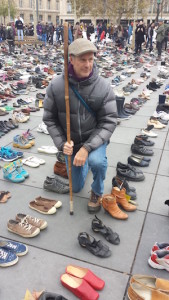 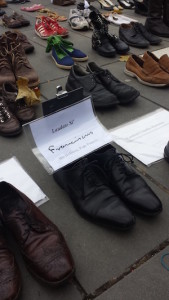 Even though the French government has outlawed protests, marches or other public activities, the word on the street is that the wheels of activism are in motion nonetheless.

I arrive at La Place de la République to find people holding banners around a tremendous display of shoes, thousands of shoes, representing the feet that were ready to march but now do so in spirit. There are even a pair of shoes with a sign indicating they’re from Pope Francis! 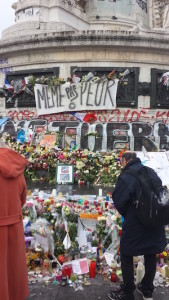 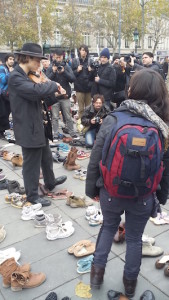 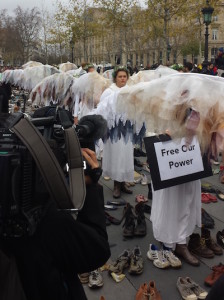 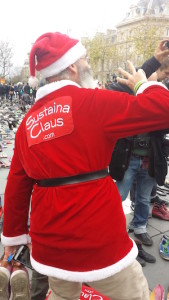 Next to the display of shoes around a prominent monument, is an ever-expanding floral tribute to the victims of the November 13th terrorist attacks. A violin player and singer from Italy perform. Women dressed as angels pass quietly through the shoes. A man promoting sustainable living is dressed as “Sustaina Claus.”

The air in the plaza is an intriguing blend of reverence and disappointment. It is political theater at its best: diverse, clever and grassroots. 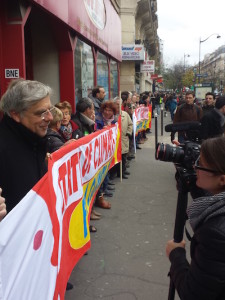 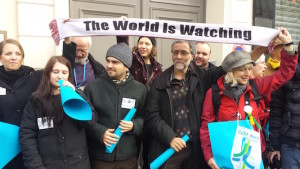 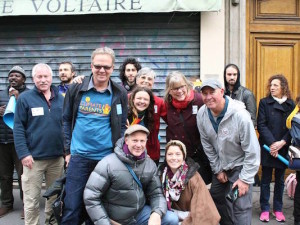 At noon, people spill out of the plaza to form a long human chain on the sidewalk along Avenue Voltaire. Eight of us from the Great March for Climate Action are here today, and we enjoy a particularly warm reunion as we work our way into the chain. 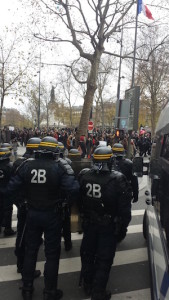 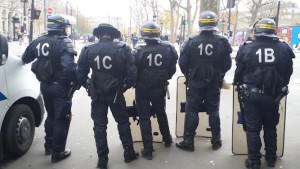 The chain doesn’t last long. Organizers hastily disband it and tell us the event is over.

Not everyone agrees. A large contingent of boisterous marchers insist on taking to the streets, defying the government’s order. The number of police officers in full riot great is astounding. As the marchers approach, they barricade the road.

I shoot video of the pending clash, unsure how it’s going to play out. When the marchers run into the wall of police, they are met by pepper spray. The spray drifts back to where I am filming, burning my nostrils and eyes, causing others near me to cover their faces and run. Click here to watch video.

The pretense that the official march was cancelled because of concerns about public safety is dispelled by the police force’s response. They are not here for security, not here to protect peaceful protesters from possible terrorist attacks. They are here to intimidate and to silence dissent.

The French government used the pretense of preventing further terrorist attacks to stifle the public’s voice, to minimize the people’s opportunity to impact the official delegates gathered for the UN Climate Summit. That is wrong and shameful.

It’s getting late in the day, and I still have eight miles to walk – from the plaza to the Summit conference site in Le Bourget.

The first two miles follow a canal. The day is cloudy but seasonal, and people are walking, exercising, hanging out, taking boat rides.

The canal comes to an end, and the remainder of my walk is on a busy road through neighborhoods that are the poorest I’ve seen in France. Most of the residents of these suburbs are from Africa, the Middle East, Asia. Unlike the walk along the canal, I see few Caucasian faces these last six miles.

I pass several women with signs indicating they are Syrian refugees in need of food. The streets are nearly as crowded with people here as they are in downtown Paris, but less than half of what I hear spoken on the street is French. 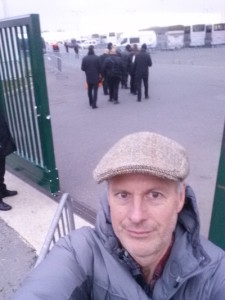 I arrive at the summit site just before dark. There is comparatively minimal police presence, and it has the legitimate feel of being there to protect and monitor. The compound is framed by a tall, green metal fence. An officer greets me. I ask if he would be in a picture with me. He declines. I ask if he would take my picture, and he declines again. I understand. I smile, get permission to take my own photograph, with the conference center and guards in the background.

I’m a little sorry I can’t stay for the Summit itself, presuming that I would have been able to get in at all. We stand at a critically important moment in human and planetary history. There is reason to be optimistic that the Summit will accomplish something of value, despite my disappointment at the government’s crackdown of freedom of speech on the streets of Paris.

But equally important work awaits me in Iowa. Indeed, if one could identify two critical geographic points for climate activism right now, one would be Paris, the other would be Iowa, where presidential candidates are increasingly as thick as flies. The candidates need to be reminded, over and over again, of the fact that climate change is a crisis, and that we need a full-scale mobilization to fight it.

Maybe my walk from Omaha Beach to Paris will give me some additional street cred from which to have that conversation. But more important, what the candidates will take far more seriously than hearing from any single one of us, is hearing from lots of us over and over again.

I hope upon my return that more people will be willing to join me and other climate activists in pressing the case with both Democratic and Republican candidates for the urgency of action. And yes, consider that an invitation to let me know if you’re on board!