No foreign policy morass is more complicated, nor more tragic, than Syria. Michel Younadam, a good friend from Homs, Syria, joins us on this week’s Forum to discuss the state of affairs in his homeland. 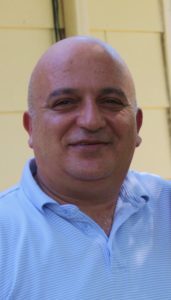 According to a United Nations report, “5,000 people flee Syria every day, and 28% of its population has now been driven from their homes. There are now 9 million Syrians who have fled, and 6.5 million who have been displaced but stay in the country.”

Syria’s problems were recently exacerbated by President Trump’s universally derided decision to abandon our long-time allies in northern Syria, the Kurds. Not knowing much about the Kurds, I was fortunate this week to receive this message from our friends with Beyond Extreme Energy:

“On October 6, Trump declared that he was pulling troops out of Northern Syria, which gave Turkey’s President Erdogan the greenlight to send troops into Rojava, the Kurdish controlled area of Northern Syria.

“Since 2012, Rojava has been under the control of the Kurdish YPG/YPJ forces, which have led a popular revolution focused on creating communites run through directly democratic councils, feminist praxis, and the creation of an ecological society.

“The Kurds of Rojava were one of the US’ closest military allies in the fight against ISIS. However, now that ISIS has been defeated, the US seems to have struck a deal with Turkey. Erdogan has led persecution against the Kurdish population of Turkey, and Turkey’s invasion of Rojava seems likely to spiral into ethnic genocide. Actions in solidarity with Rojava and its democratic, feminist, and ecological revolution are taking place all over the country!

“If you aren’t familiar with Rojava or the ecological revolution taking place in Northern Syria, check out this resource: A history of Kurdish struggle, with illustrations.”

On this week’s Forum, Charles and I discuss some of the hot-button items on the current US Supreme Court docket, including abortion, DACA, and the death penalty. We also talk about the Tulsi Gabbard – Hillary Clinton dust-up, and debrief President Trump’s claim to have created “the greatest economy in American history.”

Thanks for supporting the civil alternative to radical-right-wing radio!