Bits of icebergs can be seen that have broken off the Sawyer Glacier in Alaska, where the effects of climate change are being felt at a higher rate than in the Lower 48. (Credit: Ian D. Keating / CC BY 2.0)

On this week’s Fallon Forum, I interview Kat Haber and Bob Shavelson. Kat was a participant in the 2014 Great March for Climate Action, and remains vocal and active on a number of climate fronts. Bob is an attorney, and his two daughters are plaintiffs in the Sinnok v. State of Alaska lawsuit.

The suit was filed by sixteen young Alaskans against the State of Alaska, Governor Dunleavy, and five state agencies. The lead plaintiff, Esau Sinnok, lives in Shishmaref, a small coastal community that has seen extreme erosion in recent years due to climate-induced ice melt.

The Alaska case is similar to cases pending in Colorado, Florida, Maine, Massachusetts, Oregon, New Mexico, Pennsylvania and Washington. A ruling on a related federal case, Juliana v. the United States, is expected soon. Oral arguments in the Alaska case were delivered before hundreds of people last week to a packed courtroom. We’ll see where the court comes down, but it’s encouraging to see these cases finally being taken seriously. 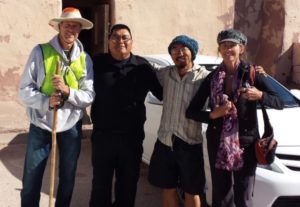 Ed with Sarah Spain, Jimmy Betts, and one of our Zuni hosts (second from left) on the 2014 March.

Also on this week’s program, attorney Channing Dutton presents a strong argument for why Exxon and other fossil fuel giants should never be granted amnesty given that they knowingly are exacerbating climate change. Channing and I also exchange a bit of banter about the Iowa Caucuses, assessing where the candidates stand on climate and whether the field is likely to shrink even further. 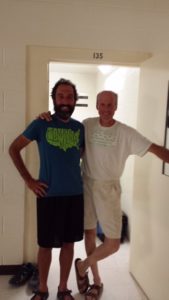 Ed and Jeffrey Czerwiec joke around in front of one of the jail cells where marchers spent the night in 2014.

Finally, I talk about the importance of abandoning Columbus Day in favor of Indigenous Peoples Day, sharing a reading from my book, Marcher, Walker, Pilgrim, when the March spent time with the Zuni people in New Mexico. (Read the excerpt, and a few others, here.) True story: We were put in jail for a night. All of us.

Thanks again for reading and for tuning into our program — which, alas, remains one of the rare progressive perspectives available on talk radio.