SIGN UP TO BIRD-DOG PRESIDENTIAL CANDIDATES ON CLIMATE CHANGE!

We’re at 54 volunteers, which is a great start. But we’ll need at least 250 climate patriots across Iowa to maximize this tremendous opportunity to shape the national debate.

And “shaping the national debate” isn’t an overstatement. Not even close. In just three weeks, we’ve already seen results from this effort:

— Our questioning of Colorado Governor John Hickenlooper about his support for fracking was picked up by the Denver Post. The video of that conversation received over 1,000 views, and four Colorado climate organizations wrote to thank us.

— Keith Puntenney and Vern Johnson, two farmers along the route of the Dakota Access Pipeline (DAPL), met with US Senator Sherrod Brown and reported that the meeting seemed more like a photo op than a chance for genuine dialogue. Vern and Keith made the news in Ohio and two Iowa tv stations.

— Kathy Byrnes and I talked with former New York Mayor Michael Bloomberg who, despite his excellent film on climate change, told us he supports DAPL and fracking. Such a disconnect. Go figure. 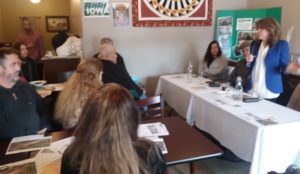 — In addition to bird-dogging Marianne Williamson at two of her events, Bold Iowa organized a forum for her attended by over thirty people. Click here for a highlights video. We’re eager to organize similar forums for other presidential candidates.

— Finally, at a cafe last week, Kathy and I questioned Andrew Yang on climate change. Indicative of the disconnect that many politicians and candidates exhibit, Yang spoke forcefully about climate change, calling it “existential threat 1A.” Good, but then he went on to propose solutions that were, to put it mildly, off the wall.

Here’s the video of our conversation with Yang, in which he offers three specific proposals to address climate change: 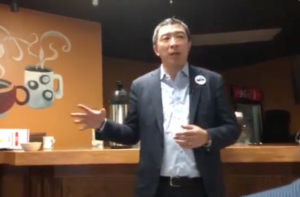 1. Give every American $1,000 per month, which would move poor people beyond “a mindset of scarcity.” The poor would then begin to care about climate change and the future. Kathy and I found this idea embarrassingly out of touch and, well, demeaning.

2. Pack dirt around glaciers to slow the rate of melt. For real. He said that. Check out the video at minute mark 1:58.

3. Since money in politics is partially to blame for America’s inaction on climate change (we agree), Yang wants to give every American $100 to donate to the political candidate of their choice. I’d love to see the bureaucracy needed to enforce such a bizarre scheme.

We’re just getting started on this, folks. Bold Iowa needs your help! America needs your help! Earth needs your help! SIGN UP HERE TO HELP! Humanity’s time is short to come up with a comprehensive, historic response to the climate crisis. For the next twelve months, Iowans have a huge megaphone — the Iowa Caucuses — which we will use to change the debate on climate change.