This week, Nik Refsland and I kick off the program. (CLICK HERE FOR THE PODCAST.) Nik is a National Guard recruiter at Drake University and a Trump supporter. After our conversation, at the 18:49-minute mark, I respond to some of the criticism I’ve received about these interviews. 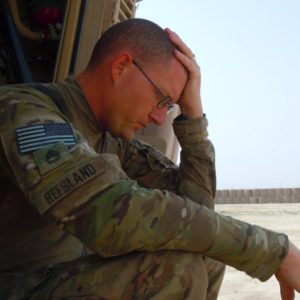 Next, Miriam Kashia shares an update on industrial hog operations. Then I share my disappointment with Attorney General Tom Miller for siding with DAPL in a recent lawsuit. Finally, Kathy Byrnes joins us to discuss planting edible trees and shrubs as one strategy toward local food self reliance.

Here’s a Cliff Notes-version of my dialogue with Nik, drawn from four separate conversations:

ED: What are your news sources?

NIK: I look to keep it as varied as possible. I listen to both sides. I like Ben Shapiro and Tucker Carlson. I also watch CNN, MSNBC, NBC, but not Fox News. I’ve never been into Rush Limbaugh and others like him.

ED: Tell us about your voting history?

NIK: I voted for Bill Clinton in 1996 because I was young — my parents were conservative and I wanted to be my own person. I’ve pretty much voted Republican ever since, but I’ve always hoped for Democratic candidates that would give me pause in the voting booth, rather than just voting a straight ticket.

NIK: In many ways, my vote for Trump was to hold my nose and hope everything goes well. I expected Trump to be someone who flip-flopped on a lot of things.

NIK: Yes. There were very few political decisions Trump made that I didn’t agree with. The only thing that would have improved his presidency is if he didn’t have thumbs, if he couldn’t tweet, if he hadn’t been so bombastic. With Trump there was no hidden agenda. He wasn’t the slimy politician telling you he was going to do something he had no intention of doing.

ED: Was there any Democrat running for president in 2020 you could have supported?

NIK: I was intrigued by Tulsi Gabbard and Andrew Yang. If it’d been a choice between Trump and Gabbard, I would have been sweating in that voting booth. But the Democratic Party won’t ever allow Gabbard to rise, even though she embodies the vital role of the Left: looking out for the disenfranchised.

ED: As a member of the National Guard, does it bother you that Trump dodged the draft five times?

NIK: Yeah, that is a concern.

ED: Was Trump’s extreme wealth a problem for you?

NIK: I’d rather have a candidate who runs on the platform of “Make Politics Boring Again.”

ED: Many Republicans believe the 2020 presidential election was stolen. Do you?

NIK: There were many things with the election that I had issues with. But even if all those issues were addressed, it would not change the results.

ED: What’s your take on the riot at the US Capitol on January 6?

NIK: I do not think that Trump incited the violence, but I do think he turned up the heat.

ED: What about the guy carrying the Confederate flag into the US Capitol?

NIK: I would have punched him in the face.

ED: Give us your rating of Trump on issues of defense and national security.

NIK: Trump didn’t escalate tensions with North Korea or Russia. He made headway with the power vacuum in Iraq and started making progress with ISIS. At first, I was worried about Trump’s unpredictability, but it might have actually helped. Take North Korea, for example. Kim Jong Un never knew what Trump was going to do, so he played it cautious. Most of the time, politicians say things they won’t ever do. With Trump, he’d say a lot of stuff I wouldn’t agree with, but when it came to what he did, I can’t think of much I disagreed with.

NIK: I think most of the political rhetoric around climate change by generals or politicians is usually for bigger budgets or control. I don’t think the world is going to end in 12 years, but we are seeing changes that are going to have repercussions. The acidity level of the ocean and its effects on coral reefs is a serious concern.

ED: So what should we do about climate change?

NIK: In an ideal world, getting off fossil fuels could happen tomorrow. But most policies proposed to address climate change are regressive, not progressive. That needs to change. I like seeing the advancements with battery technology. Nuclear power needs to be part of the solution, too, although there are still issues with containment, safety, and regulation.

ED: How do you feel about President Biden’s executive order canceling the Keystone XL pipeline?

NIK: I don’t support canceling the pipeline. It’s about jobs, but also about general prosperity. The prosperity of humankind has come with electric grids, leading to reduced mortality rates, increased infant survival, decreased starvation, and increased lifespans. Besides, ending Keystone is not going to decrease the demand for oil.

ED: How do you feel about General Motors’ commitment to 100% zero-emissions vehicles by 2035?

NIK: GM realized the market is shifting and they want to be the first to dominate it.

ED: With all that’s tearing us apart from the inside, and existential threats like climate change and nuclear war hanging over our heads, does the United States of America have a chance? Can we pull through this confluence of crises?

NIK: What I see happening is that the rational middle is waking up. People are rubbing the sleep out of their eyes, and saying, “What the hell is going on?” We have to pull through, and because of that, we will. The hard part is, difficult change often requires pain.

ED: What do you see as areas of common ground among voters across the political spectrum?

NIK: There’s a lot that Occupy Wall Street and the Tea Party have in common. They’re both skeptical of centralization, whether it’s centralized government or centralized corporations.

ED: Thank you for talking with us, Nik. If people want to get in touch with you, how do they do that?

NIK: It’s important that the military is balanced in political views. I would be devastated if everyone in the military thought like me. People can reach me at (515) 981-8785 or nikrefsland@gmail.com.