Before you scroll down to see my ranking of the Democratic presidential candidates on climate change, I’ve got three other items to share with you: 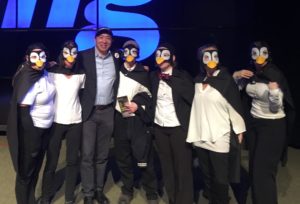 FIRST, a shout out to Bold Iowa and the 250+ Climate Bird Dogs (and, of course, the Bold Climate Refugee Penguins) who were a huge part of elevating the prominence of the climate crisis over the past year. Check out some of our accomplishments here.

Still doubt you had an impact? Here’s what Gina McCarthy — former head of the EPA, now leading the Natural Resources Defense Council — wrote in an opinion piece in today’s Des Moines Register:

“It is heartening to see the Democratic presidential candidates solidly unite around the urgent need for bold [climate] action. … That’s in no small part because Iowans have pushed them to keep climate change front and center.” 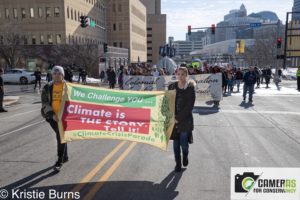 SECOND, thanks to all who turned out for Saturday’s Climate Crisis Parade. We were 1,000 strong and sent a powerful message that Iowans are fed up with the mainstream media failing to cover the worsening climate crisis.

If you have photos or video to share, please add them to our Climate Crisis Parade Photos and Videos google drive. 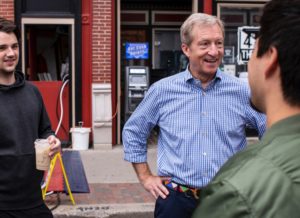 Tom Steyer on the campaign trail.

THIRD, regardless of whom you’re caucusing for tonight, please remember that any of the Democrats running is a better option than the Denier-in-Chief leading our country and the world deeper and deeper into climate chaos. That said, it’s important to send the strongest climate candidate(s) forward tonight.

That’s why I’m supporting Tom Steyer on the first ballot. Not only is Tom the only candidate committed to declaring by executive order a climate emergency on Day One, he has the strongest record of consistent, focused climate action over the past decade.

If Steyer doesn’t achieve the 15% viability threshold in my precinct, I’ll shift my support to Berne Sanders. Sanders has the second strongest set of climate credentials.

Some of you will disagree with me on one or both of these assessments. That’s fine. Many of you have been truly diligent about our responsibility as Iowans to discern and support who we feel is our best champion. I, too, have worked tirelessly over the past year and feel confident that Steyer is our best option — not only to move us forward aggressively toward reversing the current trajectory of rising greenhouse gas emissions, but as a candidate who can beat Donald Trump.

I feel similarly about Sanders, though I’m concerned he’ll try to push a climate emergency using the legislation process, not through executive order. Sanders said as much in a recent response to my question. See that exchange here.

So, here’s my ranking of the field — best climate champion to weakest. (Please note that the following rank is MY opinion, no one else’s. Equally passionate climate voices may disagree.) When you click on each candidate, it’ll take you to the Bold Iowa website where you can track our efforts to engage that candidate on climate over the past year. The interactions recorded represent just a portion of our efforts:

Thanks, and I hope you have a great time at tonight’s Caucus! — Ed Fallon