I hope to see thousands of you (seriously! … this is an existential threat, ya know!) at tomorrow’s Climate Crisis Parade. Nearly 1,400 media from around the world are assembling in Des Moines this weekend, and they need to hear our message: 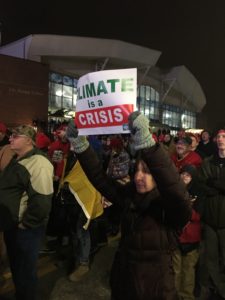 On a related note, being equal opportunity bird-doggers, Kathy and I attended the Trump rally in Des Moines last night. We had tickets (free), but by the time we arrived, the 7,000 seats were filled and the doors closed.

So, we wandered off to the overflow area, cordoned off by a fence, where hundreds of late-arrival Trumpers were watching Mike Pence on a huge screen. Dissenting voices like ours were supposed to stay cloistered within the bounds of a so-called “Free Speech Zone,” but Kathy and I preferred to mingle with Trump supporters (about 99 percent White, and mostly male).

Once in the thick of the crowd, Kathy the Fierce hoisted a “Climate is a Crisis” sign while I kept a wary eye for anyone inclined to get physical. 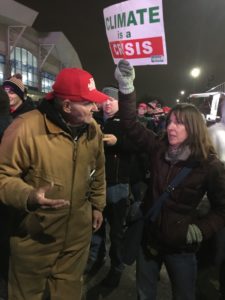 Kathy’s sign immediately attracted a slew of disapproving stares. A man in overalls sporting a red “Keep America Great” hat warned that the Secret Service would evict us. Kathy struck up a conversation with him, and while there was no agreement on climate, mutual interest emerged over the joys of grandkids.

I filmed a bit of the exchange as he and Kathy chatted for a good fifteen minutes. Watch part of that dialogue here. The man was a solid climate denier, yet absolutely understood the importance of addressing pollution.

Later, Kathy and I stumbled into another conversation with two other Trump supporters. Like the first guy, they blamed climate change on the sun, but at least we again identified environmental protection as a common concern. I asked one if there was a presidential candidate among the Democrats he could vote for. “Tulsi Gabbard,” he said.

That’s not the first time I’ve heard conservatives say they’d vote for Gabbard, which is fascinating because Tulsi is a solid progressive. (Recall that in 2016, Gabbard supported Bernie Sanders — and still pays the price.) The sad truth is, the DNC detests progressives. It does everything it can to tank the political prospects of candidates like Gabbard, Marianne Williamson, Bernie Sanders, to name a few.

My take-away from our brief time in Trump country is that, despite Trump’s consistently hateful and inflammatory rhetoric, many of his supporters don’t subscribe to such a degraded level of discourse. Many are decent people who, like us, are fed up with the status quo and care about the Earth. Some will even vote for an outsider Democrat, one who sincerely challenges the status quo — unless Democrats again make the mistake of nominating an “insider.” For Kathy and me, our outsider of choice is Tom Steyer.

My other takeaway from the Trump rally is that Kathy Byrnes is one helluva intrepid bad-ass. With her as my partner, I would bird-dog the Devil himself.