[LISTEN TO THIS WEEK’S PODCAST HERE.]

Historically, the qualification most likely to land you the job of President of the United States is to have served as vice president. Over the past 75 years, Harry Truman, Richard Nixon, Lyndon Johnson, Gerald Ford, and George H.W. Bush have all proved this point. That list doesn’t include three veeps (Hubert Humphrey, Walter Mondale, and Al Gore) who received their party’s nomination but lost the election. 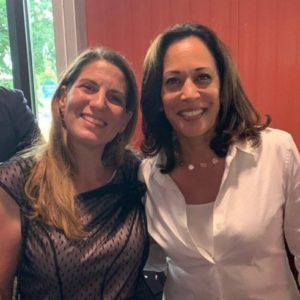 If Joe Biden wins next week — and really, even if he doesn’t — the smart money says his running mate, Kamala Harris, has the inside track on being the Democratic Party’s next nominee, and quite possibly the 46th or 47th President of the United States.

While Harris wasn’t my first, second, or even third choice in the Iowa Caucuses, I’m cautiously comfortable considering her as president. The Bold Iowa bird dogs got to meet and talk with her numerous times last year. While she wasn’t the strongest on climate, she was better than most in a field of over two dozen Democratic candidates.

For me, one memorable encounter with Harris was at a block party last October. Kathy and I were standing directly in front of Harris when a bee landed on her microphone. I reached up to take the mic. Harris eagerly handed it to me. I blew the bee off and handed the mic back to Harris. (Here’s video of that incident.)

On a more serious note, Harris’ response to our questions about doubling the flow of oil through the Dakota Access Pipeline were strong and clear. In a written statement last fall, Harris said:

“Not only should we not increase the flow of oil through the Dakota Access Pipeline, but as president I would end federal support for the pipeline entirely. For too long big oil companies have been allowed to pollute our environment and our Native American communities in pursuit of more money. That ends when I’m president. I will stop the authorization of new fossil fuel infrastructures, as we must make big changes now to protect our planet and our children’s future.”

Over the course of the campaign and through numerous recorded interactions, Bold Iowa’s bird dogs found that Harris’ perspective on the climate crisis grew stronger and clearer. (Check out the record of those interactions here.)

I’ll guess that most of you reading this email will vote for Joe Biden for one of two reasons: (1) You like him, or (2) Donald Trump scares the crap out of you.

Here’s a third reason: President Kamala Harris. America could do a lot worse.

On this week’s Fallon Forum, we discuss:

If you live in central Iowa, please support the local businesses and non-profits who make this program possible. Click on their logos elsewhere on this site and visit Story County Veterinary Clinic, Bold Iowa, and Birds & Bees Urban Farm.