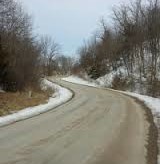 Our road through the bluffs.

The first day’s walk couldn’t have been more perfect. Temperatures in the 20s, no wind, sunny, and I have walking companions. The 13.8 route winds along the Mississippi River, crosses the flood plain, then cuts through the bluffs before ascending onto the prairie. I try to imagine how the River and it’s beautiful, fertile landscape would be impacted if an oil pipeline broke here.

As I walk along Highway 218, a white pick-up truck pulls over. The driver rolls down the window and asks, “Are you Fallon?” I say yes, and a lively conversation ensues. Darrell Hornung and his wife, Dorothy, raise cattle just up the road. The pipeline would go through their pasture, only 300 yards from their home. It would cut a long swath across their property, making it impossible for their grandson to build a home on the land.

It’s not just the land and water that are threatened. It’s people’s homes – and future homes – as well. Later that evening, I meet Jerry and Tamara Brewer. The Brewer’s home lay directly in the cross hairs of the pipeline. Thanks to Jerry’s background as a private investigator, he uncovered a legal twist that forced the pipeline company to take the proposed route off the Brewer’s property altogether. But the Brewers are still in the fight. “Initially I had a personal investment, when they wanted to take my house. Now, I have an ethical investment. If it breaks at the River, it will affect everyone in Keokuk, since Keokuk has no back-up water system.” Tamara also understands the “ethical investment.” She is the great-great-grand daughter of Chief Keokuk of the Sauk nation. She smiles when I tell her that we started the walk this morning with a blessing using cedar given to me by an Indian friend.

I stay with Matt Crowe and Brenda Knox, whose family would lose pastureland to the pipeline. Like the others I met today, they have lived in the area nearly their entire lives. Matt’s mom lives next door. He talks about the many, many people he’s known for years who will be impacted by the pipeline. “None of them are for it. Only a few big farmers are ok with it. The problem is, most people feel hopeless. They feel it’s a done deal, like it can’t be stopped.”

Other families come by Brenda and Matt’s home this evening. Many are quiet, not accustomed to being pulled into a fight like this. A few are fearless, defiant, ready to do whatever it takes to prevent this injustice. I am encouraged. We all are encouraged. It has been a full day, and I sleep well.