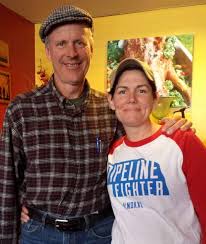 Recovering over an excellent dinner at Crazy Bob’s in Inwood.

I have always been optimistic about our prospects for stopping the Bakken Oil Pipeline. Today, thanks to the work of one Nebraskan pipeline fighter, my optimism deepened still further.

Jane Kleeb with Bold Nebraska has helped lead the charge against the Keystone Pipeline in her state. Though Jane is beyond busy, she spent an entire day in northwest Iowa, walking 9.2 miles with me to Inwood, talking with folks along the way, and joining me in an interview with KDLT TV out of Sioux Falls this evening.

Between farmsteads, Jane and I had plenty of time to talk as we battled our way through another blustery day. I shared with her concerns raised by landowners and farmers, many who feel hopeless against the power and money of Dakota Access. 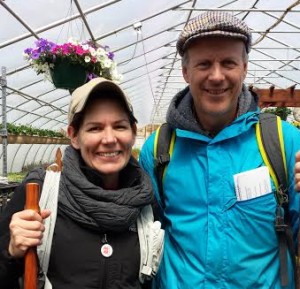 At a commercial greenhouse on the route through Lyon County

She explained that, in Nebraska, efforts to stop the Keystone Pipeline didn’t start in earnest until two years after TransCanada (the company that wanted to build Keystone) had been working aggressively to convince landowners to sign easements. By the time Jane and Bold Nebraska got involved, 50% had already signed.

Jane and others got to work and organized a solid coalition of farmers, ranchers, Native Americans and environmentalists. They held meetings, compiled research, lobbied government officials, and educated the public and the media. They also engaged in creative, catchy actions that caught national attention. Two brilliant examples: Building a solar-powered barn in the path of the pipeline and assembling the Cowboy-Indian Alliance.

Bold Nebraska has been able to hold Keystone at bay with just 10% of landowners refusing to sell to TransCanada. In Iowa, by comparison, the best estimate is that 75% of landowners have yet to sell an easement to the company!

In other words, we are comparatively well-positioned to stop Dakota Access.

I ask Jane what she would say to people who still feel we can’t stop the pipeline. She says, “You can stop any pipeline, unless its already in the ground. But you need a solid farmer-landowner group. That has to get started, both to develop a sense of community and to better reach out to the press. All voices are important, but landowners are the backbone of the movement.”

With one day to go on this 400-mile walk, that’s my conclusion as well. This is a fight that must center around landowners. They are the lead roles in this pipeline drama. The rest of us must do our best to be a strong cast of supporting actors.