{Celebrate the completion of the Iowa Pipeline Walk with an Earth Day Rally to Stop the Pipeline, Wednesday, April 22 from 5:00-6:00 p.m. at Locust and E. 7th in Des Moines. For the latest route and schedule detail, click here.} 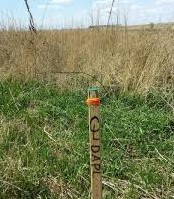 But the elements have something other than cake in mind. During the entire 13.4-mile walk, the wind roars straight at me out of the northwest. A sustained velocity of 25 – 35 miles per hour is punctuated with gusts up to 45. The wind is determined to humble me, reducing my usual brisk pace to a relative crawl. A distance that normally would take less than five hours today takes seven. I watch the sun set over South Dakota and finish the day under a thin crescent moon.

Walking into a strong headwind is akin to walking into an invisible wall. The wind pushes back as I push forward, and my walking stick must be employed to its fullest. Every four steps, I roll it forward in my palm, plant it firmly in front of me, and dig the tip into the gravel. I push so hard my arms get as much of a workout as my legs.

The temperature maxes out around 50 degrees today. At first, the wind chills my ears and hands, and I regret not bringing my winter gloves and hat. But after a couple miles, I am working so hard that hat and gloves would have been unnecessary.

Three miles into the day, I stop at a farm, as much to get out of the wind for a bit as to talk with the farmer. He is about my age, and hasn’t thought much about the pipeline. His thoughts are filled with the complexities of modern farming. His hands are covered with grease, much as a farmer’s hands 100 years ago would have been covered with soil. I prepare to head back into the wind and he says, “You must be pretty dedicated.”

“Well, I’m pretty determined,” I reply. “This pipeline is the worst thing to happen to Iowa in my lifetime, and I’m committed to doing everything I can to stop it.”

I think about dedication and determination as I walk, wind pounding away at my head and ears. I wonder if Kelcy Warren, the billionaire who owns Dakota Access, is also a dedicated, determined man. He certainly is pulling out all the stops in his determination to build a pipeline. But I wonder what kind of moral compass he has? Does he even have a moral compass? If he did, how could he justify taking people’s land against their will merely to become even richer? Does he care about the water, the land, the planet? Or is his sole dedication to money, power and oil?

Clearly, Kelcy Warren and I need to sit down over a beer. Before my windblown mind can craft that fantasy, I mercifully find myself walking through a farm composed of enough buildings to compare in size with many of the small towns I pass. There are six to seven hog confinements framing the road on either side. Even in an agricultural world that has grown industrial in scale, this farm is a giant.

Suddenly, out of the middle of these buildings, a lone white dove flies across the road in front of me. It is the first white dove I have seen since setting out from the Mississippi River over seven weeks ago.

I watch the bird. I smile, and a song comes to mind. I sing the chorus loudly as I walk through this surreal industrial farm-city:

I think about freedom, and all the farmers and landowners I’ve met who are fighting for their land, fighting to keep Kelcy Warren from tearing apart their soil, their dreams, their livelihoods. These farmers are willing to do whatever it takes to preserve their freedom. They have become my heroes. Perhaps I set out to inspire them to do the right thing, but they have become my inspiration.

Soon, I will be done walking. But I will not be done fighting. Freedom, and all that comes with it, is too important to give up on. For me, and for many others, this pipeline fight has become emblematic of the struggle to preserve not just our environment but our very freedom and liberty.