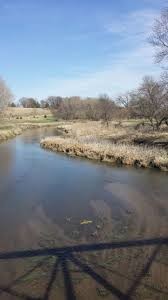 Mill Creek as it flows toward the Little Sioux River

{Help celebrate the completion of the Iowa Pipeline Walk with an Earth Day Rally to Stop the Pipeline on Wednesday, April 22 from 5:00-6:00 p.m. at E. Locust and E. 7th in Des Moines.}
{For the latest Iowa Pipeline Walk route and schedule, click here.}

“Not all of Iowa is flat,” announces a popular Des Moines t-shirt in the ongoing effort to instruct Americans about the undulating nature of much of Iowa’s topography.

“Not all of northwest Iowa is flat,” would read the t-shirt I’d design to instruct Des Moines residents on the undulating nature of Cherokee County’s topography. 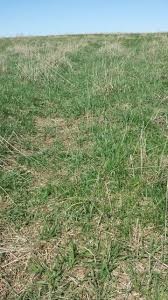 I have seen so many beautiful places along the Pipeline Walk. But today’s stroll through the rolling Little Sioux River Valley was the most beautiful yet. It was also the first time I have walked the actual proposed pipeline path, courtesy of owner Jack Montgomery guiding me through his property, which includes a large stretch of virgin prairie that has never seen a plow.

Other than woodlands, it’s a rare patch of Iowa soil that has never been tilled. Jack’s hillside prairie is one such gem. Yet this prairie shows signs of another man-made vehicle: the covered wagon! True story! As we worked our way up the grass-covered slope, I was amazed to see as clear as day the imprints of a wagon that went through this prairie over 175 years ago. What a feeling, to imagine myself trudging behind a wagon bound for the West.

“I figure that wagon must have sunk into the ground up to its axles for these imprints to be so visible after so many years,” says Jack. 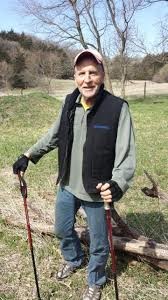 Of course, as luck would have it, Dakota Access wants to run its pipeline right through Jack’s prairie.

“It’s a historical piece of ground, and there’s hardly any virgin prairie left in Iowa,” says Jack. “There are all sorts of birds, insects and plants living here that the pipeline would disrupt. Our prairie is one of the few places in Iowa where bobolinks still live. And if there’s a pipeline leak, it would destroy the whole thing.” See video below of Mary Ann and Jack talking about the proposed pipeline and the prairie area.

Jack raises cattle at the home place nearby, where he and his wife, Mary Ann, have lived for 43 years. “For me, this pipeline is wrong because, whether the oil ends up being used in China or anywhere else, it’s bad for the climate,” says Jack.