{Celebrate the completion of the Iowa Pipeline Walk: Earth Day Rally to Stop the Pipeline, Wednesday, April 22 from 5:00-6:00 p.m. at Locust and E. 7th in Des Moines. For the latest route and schedule detail, click here.} 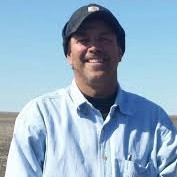 I have plenty of company today. Five people living along the pipeline route join me for stretches of the walk, including David Fordyce, Buena Vista County’s only remaining dairy farmer.

We walk by David’s alfalfa field. The pipeline would cut through the middle of it, and David is concerned that the pipeline would have significant and long-term negative impacts on his soil and crop production.

“Any time you drive over alfalfa it kills it for that cutting,” explains David, who gets four crops per year. “When the pipeline company comes through with their equipment, they’ll run over the crop and compact the soil. And if you try to replant alfalfa after that, it doesn’t do well in land that’s been compacted.”

David has been instrumental in organizing tomorrow’s meeting in Cherokee. He is expecting a good crowd, and given the sentiments of the people we meet today along the route, I wouldn’t be surprised. More than anything, there is great interest in the eminent domain bill finally making its way through the Iowa Legislature.

I tell David and others about last week’s ruling regarding the threatened use of eminent domain for a recreational lake in Clarke County, which Doug Robins and his neighbors have been fighting for over a decade. Doug tells me that the Iowa Supreme Court decision affirmed that the Clarke County Reservoir Commission was not authorized to use eminent domain. I wonder if the Court would rule similarly that the Iowa Utilities Board does not have the authority to grant Dakota Access the right to use eminent domain, since a privately-owned pipeline transporting oil across Iowa to refineries in Texas hardly qualifies as a public utility.

“This ruling helps anyone working to reign in the abuse of eminent domain, not just us,” says Doug. “Hopefully, it will catch lawmakers’ eyes, because if the Iowa Supreme Court is siding with landowners on eminent domain, it’s time the Legislature addressed the problem instead of killing legislation like they’ve been doing the past six years.”