Crossing the Des Moines River Valley north of Boone proves refreshing, invigorating. The nearly two-mile stretch offers a dramatic contrast to the flat farm fields that suddenly give way to rolling, wooded bluffs cascading down to the river below. The valley’s beauty is slightly soiled in my mind as I consider the impact of a pipeline break at this location.

I stop at a house on the riverbank and am greeted by three charging jack terriers. A cheery woman calls them off, and without even asking my name or mission, invites me in to visit with her husband. 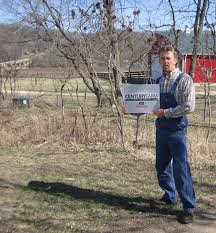 I step into a fishing cabin and find myself face to face with an older, bearded gentleman in bib overalls. He is delightful, full of stories, questions and history. He clearly loves the river, and spends much of his time fishing. On two recent occasions, the river rose to the very edge of where we are seated. I suggest climate change, but he’s inclined to blame the Army Corps of Engineers.

We entertain each other with a mix of pipeline, professional and personal stories while I devour two peanut-butter sandwiches and give my feet a much-needed massage.

I cross the river and come to a beautiful, well-kept farm house with a bright red barn. Teresa Phipps answers the door, and invites me in to talk with her husband, Weslie, a farmer and self-described strict constitutionalist, who is adamantly against the pipeline.

“The pipeline representative called me to talk about coming out here to survey,” Weslie informs me. “I told her they’d have to carry me out in a pine box before I’d let any oil pipeline people on my property.”

“And you know how she responded,” continued Weslie, still a bit shocked from the recollection. “She said, ‘I’ll make a note of that.'”

Enbridge spill on the Kalamazoo River

The pipeline would lie about 400 feet from the Phipps’ well. “I told them I’m not going to take a penny from you and I don’t want you on my land, because I don’t want to get a letter someday saying that I’m liable for a spill,” said Weslie.

Good question, and one that comes up a lot. When the pipeline breaks, who ultimately will be stuck with the cleanup cost?

As I cross the river that provides drinking water to a big chunk of Iowa’s population, I wonder how much damage a pipeline break here would cause. What if Dakota Access – a LIMITED liability corporation – just walked away from the disaster? Who would be left holding thw bag? Landowners? Taxpayers?

Exxon spill on the Yellowstone River

The price tag for cleanup of the Exxon spill on the Yellowstone River earlier this year continues to rise, now at $135 million. The 2010 Enbridge spill on the Kalamazoo River has swelled to $1.2 billion. The 2010 Deepwater Horizon spill in the Gulf of Mexico has cost $42 billion – so far.

And what does it mean to “clean-up” a damaged waterway? The standard argued by a slick corporate lawyer in court might not be acceptable to people and animals living along the Des Moines River, or for those living downstream depending upon the river for their drinking water.

I climb out of the valley, slightly winded from the fairly steep hike, with the thought on my mind that landowners may have a particularly important point of view in the public debate on this pipeline; yet all of us, across Iowa and beyond, have a stake in this battle, and our opinions matter as much as anyone’s.