In terms of opposition to the pipeline, my walk through Boone County is on fertile ground. I’ve talked with at least 60 people and have yet to meet a single one who supports the pipeline. 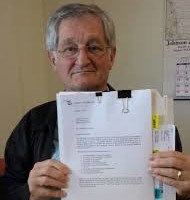 But I was saddened today to meet an elderly woman who signed with the pipeline company despite her strong opposition. She hadn’t intended to sign until her lawyer advised her to get it over with. Argh! I wanted to tell her that, just as with a big medical decision, a second opinion is always advisable.

Yesterday’s meeting in Boone drew around 40 people, including Keith Puntenney, a farmer and an attorney.

In response to the claim that Iowa already has 40,000 miles of pipeline, so what’s one more, Keith points out, “Nothing this big as ever been put through Iowa. This is like no other pipeline that’s ever been laid.”

Between Keith and the other farmers in attendance, I received quite an education about the workings of groundwater. 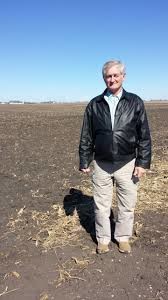 Keith on his land, wind turbines in the background

“Iowa is part of the six-state prairie pothole region, which resulted from the Wisconsin glacier,” explained Keith. “Everything around here is based on trying to manage the underground water system in order to farm, a system that has been in place and working for over 100 years.”

“This pipeline is going to create a five-foot dam. When water hits that dam, instead of running downhill like it does now, it’s going to rise up into the topsoil, into your crops. With the additional moisture caused by that dam and the heat created by the pipeline itself, you’ve got the perfect storm for crop disease issues.”

The pipeline company is telling landowners it will put the soil back the way it was. But what I’m hearing from farmers across the state is that there’s no way they can do this, given the size of the pipeline, compaction and other factors.

The concern is echoed by Keith: “This project will turn over 300 miles of Iowa farmland stewardship on its head. There is no way they can restore the land once they strip off the top soil. This company has never dealt with a state that is pattern tiled, with the water issues and kinds of soils that we have here in Iowa.”

Toward the end of the meeting, someone asks what actions they can take. I say that besides communicating with the Iowa Utilities Board, legislators, neighbors and anyone else who will listen, acquiring information is key. “Knowledge is power,” as a lawmaker once told me during my freshman term at the State House.

Regarding this pipeline, there is so much to know that it is sometimes overwhelming. The information we have, the knowledge we acquire, needs to be shared with others, distributed as widely as possible.

Yes, knowledge is power – especially when combined with truth in a just cause.