Two things before I explain why Iowa is becoming a colonial outpost:

First, I’m sad to say that the pro-DAPL bill (SF 2235) passed this week despite hundreds of Iowans contacting their lawmakers. Visit the Fallon Forum and Bold Iowa websites for news coverage and to learn how your senator and representative voted. The silver lining is that Bold Iowa’s coalition of environmentalists, landowners, farmers and Native allies worked with labor unions on a common cause. Let’s build on that!

Second, check out this week’s Fallon Forum. Among other topics, we talk with two of the five climate warriors who shut down the flow of tar sands oil in 2016. If you missed the previous week’s program, check out our conversation about gun violence, sustainable farming, and why the job of Secretary of State is important. 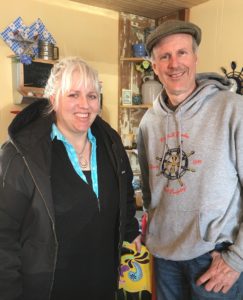 Janna Swanson with Ed Fallon at the Blue Daisy Cafe in Ruthven.

Colonization never goes well for the colonized. It went badly for the Indigenous peoples of this continent. It’s gone badly for people in “third world” countries we’ve pillaged. And it’s going badly for rural Iowa.

Yup. A new wave of colonization is in full swing. Perhaps in the twittering storm of political scandals and legislative hubris you haven’t noticed. But rural Iowans can’t help but notice as the forces of colonization steamroll their farms and communities.

Here are the most egregious examples (and yeah, the acronym spells “PLOW,” for what that’s worth):

PORK. There are 15,000 hog confinements (CAFOs) in Iowa. Given the soaring foreign demand for pork, state officials say that number could jump to 45,000! America’s largest pork producer, Smithfield Foods, is now owned by a Chinese corporation. Smithfield will get rich exporting pork to China while rural Iowans are stuck with foul air, lower property values, contaminated water, a decline in quality of life, and continued depopulation. 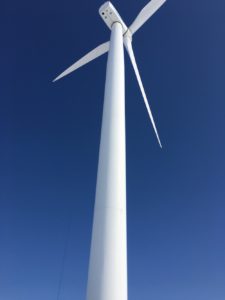 Some new turbines are as tall as two football fields.

OIL. The Dakota Access Pipeline carved a 350-mile scar across Iowa, damaging topsoil and threatening our water for a Texas corporation’s export crude oil pipeline. As I’ve warned, don’t be surprised if Big Oil tries to build a second pipeline through Iowa.

WIND. Industrial Wind Installations (IWIs) are meeting greater and greater local resistance. More are in the works and problems associated with the turbines are fomenting extensive and impassioned local resistance.

Perhaps that last item took you by surprise, coming from someone who cites climate change as the gravest threat to life on Earth. I’ve always been disturbed by any concentration of economic power, though in the past I’ve grudgingly given wind energy a pass because of the urgency of the climate crisis. 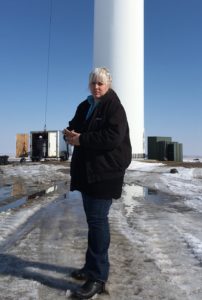 Janna Swanson with the Coalition for Rural Property Rights

To be clear, we absolutely need to move beyond fossil-fuel consumption as quickly as possible. Energy conservation, reducing consumption, and sequestering carbon are three of the most important actions we can take.

We also need a robust and rapidly expanding renewable energy portfolio. The backbone of that portfolio must be solar — and solar must be controlled by individuals, communities, family farmers, and small business owners. There’s room in that portfolio for wind, too, but not the centralized industrial model that increasingly dominates more and more Iowa counties.

While a handful of landowners are making money leasing their land for turbines, monopoly control of wind is wreaking havoc on rural landscapes and the people who live and farm there. In February, I traveled to Palo Alto County to visit Janna Swanson, a leader with the Coalition for Rural Property Rights. Palo Alto residents are suing MidAmerican Energy and Invenergy over a massive 340-megawatt project near Emmetsburg. There are 268 residences in the target area — yet only 24 have signed a contract to allow turbines on their land!

IWI opponents cite visual blight, shadow flicker, noise, flashing lights, pressure, turbulence, the impact on farming, and the risk to bats and birds. A separate blog could be written about each of these concerns.

While the scientific and medical impacts of IWI’s continue to be hotly debated, one thing is clear: the vast majority of people who live nearby don’t want them. That needs to be respected. When proposing an IWI, decision makers must give far greater consideration to local concerns than they do at present.

“Some people live next to a turbine and don’t have a problem,” Janna told me. “For others, there’s a cumulative effect. Take the intense pressure and turbulence. You can feel it when you’re standing nearby, almost like it’s grabbing at your heart.”

Janna says many Iowans complain that they can hear the turbines inside their home at night, even with a white-noise machine cranking away. It’s affecting their health. In some places, long-time residents have had to sell their home and move because of health problems attributed to the turbines.

A group of Palo Alto residents is suing to have the Palo County wind project stopped. Plaintiffs are preparing for an April 27 court date. The case is likely to end up before the Iowa Supreme Court.

Right now, 37% of Iowa’s electrical generation comes from wind. From the perspective of reducing fossil fuel consumption, that’s encouraging. But it comes at a heavy price for rural Iowa. It’s a price we shouldn’t have to pay given the more sustainable and less invasive options available.

As I said earlier, with Iowa’s land protected from foreign ownership, we effectively have a moratorium on that element of colonization. Perhaps it’s time for moratoriums on CAFOs, IWIs, and crude oil pipelines, too. That would carve out some space for us to have a deep, democratic conversation about what Iowa should look like in 50, 100 or even 500 years. Perhaps the original victims of this land’s colonization, Native Americans, could lead and direct that conversation.

One thing is emphatically clear to me: eminent domain should NEVER be used to condemn land for transmission lines to ship Iowa’s wind to Chicago or the East coast. An effort to use eminent domain by the Rock Island Clean Line (another Texas corporation) was defeated last year. Given the money and political power behind IWI, don’t be surprised if another proposal surfaces.

Regardless of where one stands on pork, oil, or wind, we should all agree that it’s wrong to ignore the voices of rural Iowans in order to export our resources to distant ports — whether those ports lie on Lake Michigan, the Atlantic Ocean, or the China Sea.