Most of the mainstream media missed it, as did most of Iowa’s political leaders. You might have missed it too, but last week, a truly important event happened in Des Moines. 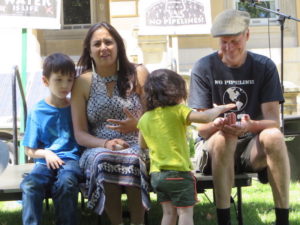 No, it wasn’t Independence Day, although that’s important, and this year’s celebration was unique given the Legislature’s decision to legalize fireworks.

The truly important event was the NoDAPL Rally, Concert and Call to Action at the Iowa State Capitol on July 1, spearheaded by Christine Nobiss and Indigenous Iowa. It was small, maybe 150 people. But participants came from all over with a united sense of purpose that will continue to shape the conversation on climate, water and our land well into the future. 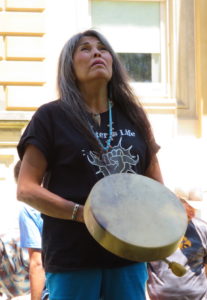 Regina Tsosie with the Native American Coalition of the Quad Cities opens the rally with a song.

July 1 showed that Native voices are not backing down in the fight to protect Earth from the full-blown war being waged against her by greed and myopia.

July 1 showed that Indigenous leaders are no longer isolated, and that people from many nations are working together in this struggle. There were at least ten Native nations represented at the rally.

July 1 showed that non-Native allies increasingly understand that, as Native people step forward to assume leadership roles, we must stand with them as supporters and resist the colonial impulse to sweep in, take over and show them how it’s done. 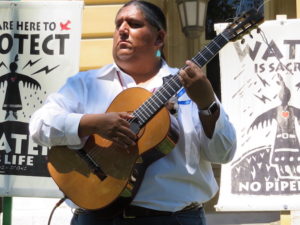 Gabriel Ayala of Tucson, Arizona, headlined the rally with powerful music and words.

I wrote about this truth in one of my blogs from Standing Rock last year, and reprint a portion of it here:

Manape LaMere, a camp leader and one of the seven Elders, invites us to a meeting of camp Elders. Lyssa and I lean into the blizzard for the grueling ten-minute walk from our tent site to the dome. 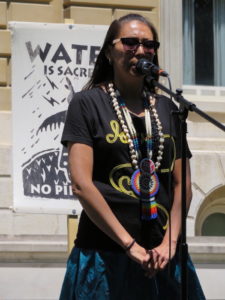 We assemble in a cold, crowded structure heated by a wood stove. The air is filled with a cocktail of smoke from sage, wood and tobacco. With people constantly coming and going, bursts of blizzard air slip in through the dome’s entrance. The interior never warms up much.

The meeting is long, interesting, important. The Elders talk about tribal unity, and the importance of non-native allies remembering that they are guests and not here to provide leadership. The camp is governed by Native leaders using traditional structures and time-honored procedures. This is likely to be foreign, uncomfortable to non-natives. It’s easy for those of us from a western mindset to slip into a mode of benevolent, well-intentioned colonialism. It’s easy for us to want to take over, insist on a “better” way to do things. 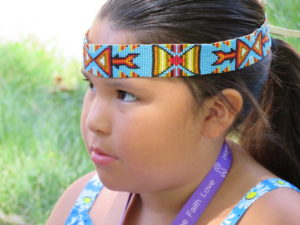 It’s solid advice. White folk still have this imperial mindset, where we’re the ones to fix things, the ones who ride to the rescue.

I don’t watch a lot of movies, but as I listen, Dances With Wolves comes to mind — it takes a white guy, Kevin Costner, to help the Indians figure out how to save themselves (he fails).

At what point will European-Americans, as individuals and collectively, move beyond the failed notion that we have all the answers? Clearly, we have a ways to go if a U.S. Congressman (Steve King) can disparage non-white constituencies as “sub groups” while making the outrageous statement that historically, all valuable contributions come from whites. 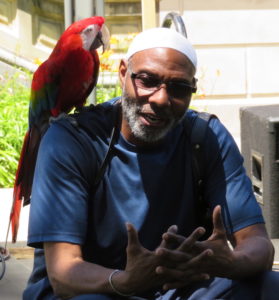 After each of the Elders speaks, Manape invites me to share what’s happening in Iowa in opposition to the pipeline. I’m honored to have this opportunity, and talk about landowner and farmer resistance, upcoming court hearings, and Jessica Reznicek’s open-ended fast demanding revocation of Dakota Access’ permit.

They appreciate my report and the commitment of their allies in Iowa. But here at Standing Rock, this movement is more than just a fight against the pipeline. It’s a movement of historic proportions, a movement that’s just beginning, a cultural revival of traditions that will supplant the failed, non-sustainable paradigms that have dominated Western civilization. 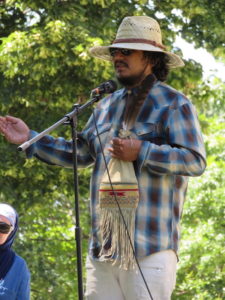 I ask Manape what happens after the pipeline fight is over. “The traditional chiefs who’ve been appointed to lead this camp are looking to build a future that is sustainable and eco-friendly,” says Manape. “We’re a community where people are showing up with wonderful technology, whether it’s heating or cooling systems or just general power usage.

“And this new form of government we’re building is breathing life into our people, reviving the significance of our treaties. Some people get it, some people don’t. But what we’re doing is going to save non-Natives as well as Natives.”

I hope you’ll take time to review the photos and video we assembled from July 1. You’ll find it in my Facebook “NoDAPL Rally, Concert and Call to Action” album and Facebook “NoDAPL Rally on July 1, 2017” playlist and in various other places too numerous to list. Also Rodger Routh produced a wonderful summary video. Videos include some powerful speeches by both Native and non-Native leaders. Thanks for continuing to stand together! – Ed