Sometimes I just wanna scream. (OK, sometimes I do, though never loud enough to wake the neighbors or chickens.)

HOW MUCH MORE EVIDENCE DO WE NEED!!? (Caps, bold, italics and underline intended) 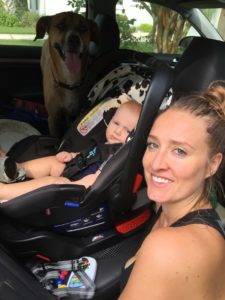 Consistent with what climate scientists have forecast:

* Storms are getting stronger — never before have two Category 4 hurricanes hit the U.S. in the same year.

* Unprecedented wildfires continue to rage in ten Western states, with 21,000 firefighters working to contain them.

* Heck, there was even a large wildfire in Greenland this summer. Freaking Greenland!

One could cite many more statistics. They add up to the undeniable reality that “climate change is rolling toward us like a freight train, mucking up our weather and our lives.” (Ed Fallon, “Get Your Lazy Ass Out of Bed.” Yeah, I just quoted myself. Awesome, hey?)

So one would think that if someone, say me, listened to hours and hours of radio news reports while driving 1,200 miles to help evacuate his daughter-in-law, grandson and son’s dog (who is more qualified to serve as the USDA’s Chief Scientist than Sam Clovis, just saying) from South Florida to safe haven in the North . . . you’d think I’d hear just one mention of the link between climate change and Hurricane Irma. But no. Not on CNN. Not on CBS. Not even on NPR.

Well, ok, one mainstream media outlet did mention climate change: Fox. Yup. A Fox News anchor interviewed a meteorologist about Hurricane Irma and asked if it was “just cyclical.” The meteorologist paused and said as politely as he could that, well, actually, there’s a lot more warm water in the Atlantic Ocean than there used be.

I hear it now: “Fallon, stop politicizing this terrible disaster. Just focus on saving lives and protecting property. You can have your climate rant after the waters recede and power is restored.”

Sorry, but that argument is B.S. The time to talk about the Irma-climate link is NOW — not after the media have moved on to the next hot item in the news cycle.

Discussing climate change isn’t politicizing the news (like that never happens). We’re talking science, not politics. Politics is when, for example, an elected official takes money from Energy Transfer Partners and then supports the Dakota Access pipeline, as a bipartisan cadre of Iowa political sell-outs did last year.

Ignoring the primary cause of this record-breaking hurricane is unreasonable, irresponsible and lets another teachable moment slip through our fingers as we free fall toward catastrophe.

CLIMATE CHANGE MUST BE PART OF THE CONVERSATION WITH EVERY UNPRECEDENTED METEOROLOGICAL MOMENT.

Help make that happen. One thing you can do is support Bold Iowa. Our funding comes from people like you who care deeply about the climate crisis and renewable energy, eminent domain abuse, money in politics and the embarrassing ineffectiveness of our political leadership. So, yeah, we’ve got our hands full. If you can convince just one of your hands to take a few minutes to make a donation of $25, $50 or $100, we’d be most grateful.

Also, here’s a link to last week’s action to encourage Gov. Reynolds to remove Richard Lozier from the Iowa Utilities Board, and . . .

. . . a link to my interview with Lee Camp regarding the Energy Transfer Partners lawsuit naming Bold Iowa and citing these very blogs. Thanks!