As Democrats puzzle over who to nominate for president, keep this formula in mind:

Look no further than the last five presidential elections for validation of this solid predictor: 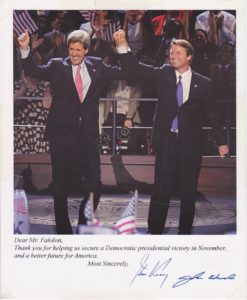 George W. Bush beats Al Gore. W was the guy you’d wanna have a beer with. Gore came off all stiff and, well, establishment-like. Perhaps those things matter more than they should. But there’s no denying they matter. A lot.

Bush beats John Kerry. I received autographed photos from each candidate shortly before the 2004 election. The two pics say it all. What was Kerry thinking, sending out a polished image that reeked of pomp and privilege? And yeah, I have no idea why I received one from Bush, but at least he spelled my name correctly. 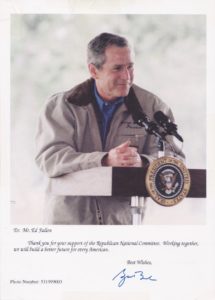 Barack Hussein Obama beats John McCain. Despite the perceived liability of a name that reminded voters of both Saddam Hussein and Osama Bin-Laden, Obama beat the much-respected McCain. Why? Fresh face promising hope and change up against a guy seen as having been inside the system way too long, notwithstanding McCain’s history of bucking his own party.

Obama beats Mitt Romney. Really, was anyone surprised? Did Republicans think they could oust “hope and change” by nominating the very embodiment of slick, polished, and impeccably well-connected?

Donald Trump beats Hillary Clinton. Sure, Trump and Clinton are both emblems of the wealthy status quo. But Clinton couldn’t — or perhaps simply didn’t — run away from it. Trump’s off-the-cuff, unscripted crazy talk offered an intoxicating brew for an electorate bi-partisanly fed-up with politics-as-usual.

Trump was ready to pick up where the British left off in 1814 — burn down Washington and let the ashes scatter where they may. The fact that many Americans were, and still are, OK with “burn it down” is deeply disturbing. It’s also entirely understandable, given the extent to which the average American continues to fall further behind as more and more wealth and power accrue to a thin upper crust.

It’s beyond disturbing, deadly even, that Democrats fail to grasp the essential importance of nominating an outsider (other than President Hope-and-Change). A united, progressive, anti-status-quo Democratic electorate (and ultimately, presidential nominee) is our strongest firewall between liberty and the full blossoming of Fascism in America.

I’ll repeat now what I said in October, 2016: Donald Trump could win.

It could happen again. If it does, it’s probably game over on averting both climate catastrophe and America’s slide into Fascism.

Truly, the fate of the nation and world rests with Democratic voters in four small states — Iowa, New Hampshire, South Carolina, and Nevada. Democrats need to push the candidates for concrete answers to the daunting challenges of our time. More important, we need to root out candidates saddled with the baggage of unelectability that burdened Gore, Kerry, and Clinton.

Seriously, Democrats must not screw it up this time. The stakes are too high — higher than ever before, and perhaps higher than they’ll ever be again.

On this week’s Fallon Forum, Charles Goldman and I discuss the Dems’ CNN/Jerry Springer debate. Charles asks whether “Medicare-for-all” is simply a trap set for Democrats, by Democrats. We also talk about how President Trump’s proposed repeal of Obama’s emissions standards has run into opposition from US automakers. We talk about Trump’s latest fundraiser: plastic straws, which at least appear to be American made. We also analyze Michael Moore’s advice to Democratic presidential candidates, some of it good, some of it questionable.

MEA CULPA: Apparently, some (not all) of the racist Rush Limbaugh quotes I included in last week’s blog were fabricated. My bad for failing to properly source them. But that doesn’t change my point, which I’ll reiterate here: Limbaugh and Trump are racists.