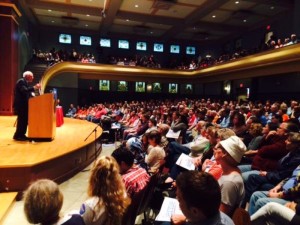 Bernie Sanders speaks at Drake University this past weekend.

Whether it’s a seat at City Hall or residency in the White House, the lure of public office is powerful. In the desire to win, politicians utter all manner of things they don’t believe, won’t do or simply can’t accomplish. One of my all-time favorites is Terry Branstad promising population growth in all 99 counties. I never knew quite how Branstad planned to accomplish that. Apparently, neither did he.

Martin O’Malley was the lone presidential candidate with a presence in Des Moines’ Pride Parade.

It’s not hard to imagine why candidates for President would spend tens of millions of dollars redesigning their image and message if they and their handlers thought it would improve marketability to voters. Indeed, the country is now infested with political consultants getting rich providing such a service.

So, how does the responsible voter sort fact from fiction, sincerity from pandering, deliverable promises from marketing ploys? How do we select the presidential candidate most likely to do what he or she says they’ll do? Easy answer, really: pay more attention to what they’ve done than what they say.

Easy answer, sure, but easier said than done. You’ll find occasional tidbits of substantive discussion about issues in the corporate media, particularly in print, but not enough. Being a responsible early-state voter requires digging, analysis and relying on advocacy organizations that care more about issues than personalities, organizations that have the time and resources to dig into this stuff.

Perhaps this is obvious advice, but it’s a matter of being a good shopper. You buy a used car, you not only kick the tires and check under the hood, you find out how it performed over the course of its life. Voters in Iowa, New Hampshire, South Carolina and Nevada have a unique opportunity to test drive the next President. Along with that opportunity comes great responsibility. America is counting on us to invest the time and energy needed to choose wisely.

(1) What do Pope Francis, Walmart and dead chickens have in common?

(2) In Caucus Buzz, we look at recent happenings for the four declared (or virtually declared) Democratic candidates for President: Webb, Sanders, O’Malley, and Clinton.

(3) Reverend Hugh Stone joins us to talk about the struggle within the United Methodist Church over GLBT equality.

(4) Jane Kleeb of Bold Nebraska and I compare notes on pipeline activism, and discuss how ethanol is entering into the conversation.

(5) We’ll look at the EPA’s recently-released study on fracking, which some are calling an industry sell-out.