The oil spill in northwest Iowa has been “contained,” according to authorities. I’ve yet to see the price tag on how much taxpayer money has been spent cleaning up the mess. It also remains to be seen whether the spill will contaminate water supplies downstream in Sioux City and Omaha. 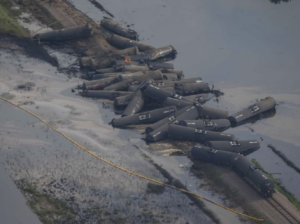 Since the BNSF Railway train wreck last Friday that caused the discharge of 230,000 gallons of Canadian tar sands oil into the Little Rock River, Florida and Rotterdam have seen their own oil spills. Perhaps I’ve missed others. The bottom line is, whether by train or pipe or cargo ship, oil and gas spills happen all the time! Check out the astounding record in Wikipedia’s “List of pipeline accidents in the U.S. in the 21st century.”

Ironically, just one day before the spill in northwest Iowa, President Trump again did the bidding of the oil and gas industry by dumping President Obama’s initiative to prevent oil spills.

Pushing back against the insanity of these spills, leaks, and presidential executive orders that violate both science and common sense, we must continue to do everything we can to turn hearts and minds away from fossil fuels and toward decentralized, sustainable energy alternatives.

Here are three simple things you can do to help:

1. Share the press release (below) with your friends, co-workers, family members and media contacts.

2. Spread the word about the First Nation – Farmer Climate Unity March, which will raise awareness about the all-important landowner/Sierra Club lawsuit against the misuse of eminent domain to build the Dakota Access Pipeline.

Here’s the release on the BNSF spill. Scroll down further for detail on this week’s Fallon Forum. Thanks! – Ed

Leaders of Bold Iowa and Indigenous Iowa today expressed deep concern for the families, communities, land and water impacted by yesterday’s oil spill in Lyon County, Iowa. At the same time, the organizations’ leaders reminded people that these disasters are inevitable as long as policymakers give preferential treatment to fossil-fuel giants.

“All forms of transport for this deadly substance will fail,” said Christine Nobiss, founder of Indigenous Iowa. “The poison will be delivered into our systems through the water, food and air we ingest. This cycle will continue until we simply stop extracting fossil fuels from the ground. It took millions and millions of years for the Earth to create these substances and, frankly, there’s a reason most of it is buried deep within her. Let’s just leave it there and demand better, renewable and sustainable energy infrastructure.”

“Whether these big corporations move their product by pipe or train, there are going to be leaks and spills,” said Ed Fallon, a former lawmaker who directs Bold Iowa and hosts The Fallon Forum. “This time it was a train, transporting foreign oil through our state. Next time it could be the Dakota Access Pipeline, which we’re fighting in the courts.”

Nine landowners along the pipeline route have joined with the Iowa Sierra Club to sue the Iowa Utilities Board (IUB) over illegally authorizing the use of eminent domain to take their land. The case is expected to be heard by the Iowa Supreme Court this fall. If the ruling is favorable, it could stop the flow of oil.

To raise awareness about the importance of the lawsuit, Bold Iowa and Indigenous Iowa are organizing the First Nation – Farmer Climate Unity March. The march begins on September 1 with a press conference at the IUB’s office in Des Moines. Following the pipeline route through Story, Boone and Webster counties, it concludes with an action in Fort Dodge on September 8. Fifty participants representing farmers, environmentalists and Indigenous nations are preparing to walk the entire 90-mile route, averaging roughly 11-12 miles per day.

In April of 2015, Fallon finished a 400-mile walk along the route of the Dakota Access Pipeline, from Lee County in the southeast corner of the state to Lyon County in the northwest. “I spoke with a couple dozen landowners and farmers in Lyon County during that walk,” recalls Fallon. “Very few of them supported an oil pipeline running through their land and across their rivers. After what happened yesterday, I bet they’re equally unhappy with oil trains.”

Indigenous Iowa was founded by Christine Nobiss, Plains Cree-Salteaux from the Gordon First Nation. Indigenous Iowa raises awareness about the devastating effects that oil, gas and coal have on our environment while simultaneously promoting the development and implementation of renewable energy.

On this week’s Fallon Forum: