CHECK OUT THIS WEEK’S PODCAST. Among other topics, I discuss what I’ve learned talking with Iowa Trump voters. Here’s a summary:

1. Most Trump voters are not racist, misogynist, or stupid. Many I spoke with were critical of Trump’s more divisive statements. One voter creatively said he wished Trump didn’t have thumbs — a reference to the former President’s propensity to binge-tweet late-night crazy talk.

2. Consistent with my experience talking with voters across the political spectrum, my Trump voter friends were grateful for the opportunity to be heard. The message here for urban politicians hoping to find support in rural and blue-collar communities: show up, listen, don’t lecture, be nice.

3. There isn’t a neat and tidy partisan box you can plunk all Trump voters into. Iowans’ reasons for supporting him are surprisingly diverse. 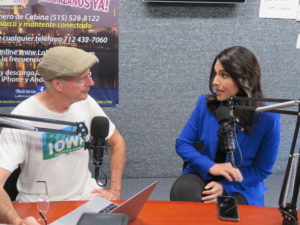 4. When I asked if there were any Democrats running for president in 2020 they liked, nearly every Trump voter said they would have considered supporting Tulsi Gabbard. That says volumes: a progressive-populist Democrat who supported Bernie Sanders for president in 2016 appeals to nearly all thirteen Trump voters I spoke with.

5. A big disappointment for me was that only a few Trump voters agree with the accepted science on climate change. The fossil-fuel-funded denier industry has proven very successful in its campaign to discredit the climate emergency.

6. No particular media outlets — not even Fox — were mentioned consistently as news sources. Trump voters get their news from a surprisingly broad array of sources.

8. It’s become clearer to me that underlying America’s growing political divide is the disintegration of what used to be called “the free press.” For starters, three changes are needed: (1) break up media monopolies, (2) restore the Fairness Doctrine, and (3) repeal the Telecommunications Act signed by Bill Clinton in 1996.

9. Perhaps the most important takeaway is this: every single Trump voter I met is a good person.

10. Finally, in terms of identifying common ground, I asked if they agreed or disagreed with the following statements — all positions I support:

My Trump voter friends and I agree on most of these points. Sure, I didn’t ask about key issues like health care, education, and the environment, and I avoided hot-button issues like guns, abortion, and marriage equality. But to say that Trump and Biden voters live in completely different universes, as partisans contend, is simply not the case.

So, while I’m scaling back my effort to interview Iowa Trump voters, it’s important to keep this dialogue going. I hope you’ll listen to this series of interviews, either on our podcast or one of the stations that rebroadcast the program. CLICK HERE TO LISTEN ON THE FALLON FORUM WEBSITE.

Most important, I hope you’ll make an effort to talk with and listen to Trump voters you know. It takes patience, an open mind, and a loving heart to build bridges and identify common ground with people often demonized by politicians and the media. When the powers-that-be divide us, we all lose. Let’s change that. — Ed Fallon

(01:56) What I’ve learned talking with Trump voters
(15:08) Even as pipeline construction stops, DAPL threatens to expand
(27:35) Iowa Secretary of State politicizes election debacle
(37:41) Hate crimes against Asian-Americans on the rise, with Kendrew Panyanouvong, former digital director of Eddie Mauro’s 2020 US Senate campaign
(51:09) April garden Q&A, with Kathy Byrnes of Birds & Bees Urban FarmWatch the conversation with Kathy Byrnes on our YouTube channel.Please support the local businesses and non-profits who make this program possible. Click on their logos elsewhere and visit Story County Veterinary Clinic, Bold Iowa, and Birds & Bees Urban Farm.Subscribe to the Fallon Forum on Stitcher, Apple Podcasts, or your preferred podcast platform. Check out our website and Facebook Page, and listen to the program on these and other local affiliates: