When I spoke at the Rockefeller Fund Conference on Pipelines and Eminent Domain last week, I emphasized that if we’re going to argue against the abuse of eminent domain for a pipeline, we truly have to get to know the landowners and tribes who sit in a pipeline company’s crosshairs. (Read the full text of my speech here.)

I also spoke about how in Iowa we are down to the wire in our fight against the Bakken Pipeline. Over 400 people have signed the Pledge of Resistance, and I encouraged attendees at the conference (and I encourage you!) to read the Pledge, consider signing it, and share it with others.

Looking beyond this pipeline battle, I reminded people that Donald Trump’s stand on eminent domain could hurt him badly in the general election. I believe Trump can be beat on eminent domain in swing states like Iowa. And I believe this battle against the abuse of eminent domain is a fight that is at the very heart of our identity as Americans. This is about freedom. This is about liberty. This is about people’s right to happiness and prosperity through the responsible use of their land and property, without fear of some big, powerful corporation, working hand-in-hand with corrupt government officials, taking what is not theirs simply to satisfy their lust for money and power.

On that argument, Trump can be beat. And oh, while in Atlanta, our crew of fearless pipeline fighters paid Mr. Trump a visit, and our action was covered by . . . um . . . Alex Jones. See what you think, and  forgive me for being distracted by the guy with the “F*** Trump” t-shirt. Here’s the link. 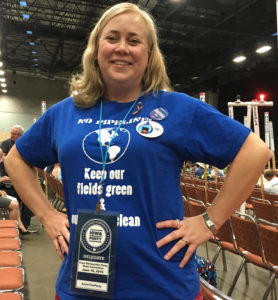 Closer to home, major kudos to April Burch for convincing delegates at the Iowa Democratic Party (IDP) convention to include The Climate Mobilization‘s language in the Party Platform. In her speech in favor of changing the IDP platform plank from “We support Renewable Energy Standard Requirements (40% by 2020; 50% by 2030; 100% by 2050)” to “We support Renewable Energy Standard requirements of 100% by 2025,” April said:

“While it appears that the majority of Iowa democrats support the idea of reducing carbon emissions to 350 parts per million (ppm) alongside Bill McKibben of 350.org, we cannot and will not even approach scaling back to 350 ppm in our lifetimes unless we immediately fight for the most aggressive climate change measures imaginable.

“This requires the Iowa Democratic Party to send the strongest message possible that we are serious about averting the climate crisis. The Climate Mobilization pledge to commit to 100% renewable energy by 2025 allows us to soundly reject new fossil fuel infrastructure projects like the Bakken Pipeline as well as the horrors of bomb trains, catastrophic oil spills, and fracking.

The change passed on a voice vote! Way to go, April!

On today’s Fallon Forum, we talk with:
– Jonas Magram with the Bakken Pipeline Resistance Coalition about his arrest at the recent Break Free From Fossil Fuel action at the refinery in Whiting, Indiana.
– Cherri Foytlin of Bold Louisiana about efforts to prevent further oil drilling in the Gulf of Mexico.
– Wally Taylor, attorney for the Iowa Chapter of the Sierra Club, about concerns raised over the IDP’s invitation to North Dakota Senator Heidi Heitkamp to speak at the IDP’s annual Hall of Fame Dinner.
– Megan Holleran of Susquehanna County, Pennsylvania, whose family lost the battle to stop their maple trees from being cleared, but won the battle against the Constitution Pipeline, which was never built.