As we build to the big rally on April 29, I am all kinds of excited about the upcoming Climate Justice Unity March! We have 20 people planning to march each day, and if you’d like to participate for one day, or the entire week, there’s still time to sign up. Click here to sign up.

Within the past 24 hours, I’ve spoken with mayors of two of the small towns we will stay in. What they are most excited about is the opportunity for dialogue, as they agree emphatically that the level of political acrimony in our country today is beyond anything we’ve ever seen. So, the evening forum / dinner / music gathering will be just as important as the daily march.

Here’s the press release we sent out today.  The original release can be found here on the Bold Iowa website. Please share with others, and contact me if you have any questions or need information.

And yes, WE ARE LOOKING FOR DONATIONS! Email me at ed@fallonforum.com if you’re able to help.

Iowans to Embark on Eight-Day, Eighty-Mile March for Unity on Climate
Twenty-five marchers of diverse backgrounds to depart from Little Creek Camp on Earth Day (April 22), arrive in Des Moines on April 29 for People’s Climate Rally at State Capitol 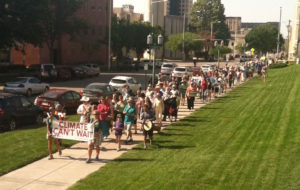 Des Moines — A group of Iowans of diverse backgrounds will embark on an eight-day, eighty-mile Climate Justice Unity March later this month to help build a broader coalition organizing for action on climate, environmental and racial justice, and clean energy jobs — and build momentum leading up to the People’s Climate Movement Rally at the State Capitol in Des Moines on April 29.

“The Climate Justice Unity March provides a unique opportunity to bring these voices together through the dignified, disciplined commitment of marching, and through non-confrontational gatherings each evening that will build momentum for the April 29 People’s Climate Movement Rally at the Capitol and forge new relationships essential to the work we must do going forward,” said Bold Iowa director Ed Fallon.

“The evening community gatherings will be as important as the daily marches,” added Fallon. “As we work to build the strongest possible alliance to push back against the failed policies of status quo politicians at both the state and federal level, it’s essential that we take time to listen to each other and embrace our common ground and destiny.”

“Little Creek Camp is an embodiment of the change that needs to happen at all social and environmental levels,” said Christine Nobiss, a Plains Cree woman from Iowa City and founder of the camp and Indigenous Iowa. “So it’s fitting that the Climate Justice Unity March starts here and ends at the State Capitol, where so many important decisions are made.”