{WATCH THE FIVE-MINUTE VIDEO PRODUCED BY SHARI HRDINA THAT GIVES ME SUCH HOPE!}

Democracy in America is not dead. But it is seriously ill, and most of us know it. 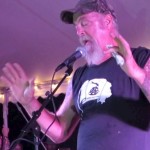 Now, I am optimistic by nature. But in recent years, I sometimes find myself in despair over the extent to which Big Business and Big Government control our lives – and conspire to shift more and more of OUR wealth into their pockets.

On August 29-30, 2015, in the far southeast corner of Iowa, something very special occurred on Hughie Tweedy’s farm. Democracy proved it is still alive and ready to fight. The Tweedy family has deep roots in this rolling country along the Mississippi River, and Hughie is a vocal and colorful opponent of the proposed Bakken oil pipeline.

Well, “vocal” and “colorful” took on new dimensions last weekend, as nearly 2,000 friends, family members and fellow pipeline fighters descended upon the Tweedy farm for a festival of camping, music, food and organizing. The diversity, unity and spunk of those assembled imbued me with new hope for democracy. Farmers and hippies, rednecks and environmentalists, Democrats and Republicans and Libertarians and independents. People arrived by pick-up truck, Prius and Harley. They came to support Hughie and other landowners fighting to stop the Bakken pipeline. They came to say that all of us average, working Americans have a lot more in common than any of us do with the executives sitting in corporate boardrooms and their bought-and-paid-for politicians sitting in state and federal halls of power.

Most of us will admit that our political system is a mess. But it’s the system we’re stuck with, for now at least. We can make it work for The People when we organize and look beyond our differences and diverse backgrounds to a greater vision of our common good.

At the Tweedy farm, that reality was on display last weekend. If, like me, you sometimes need a reminder that the passion for liberty and justice still burns strong in America, this was it. Check out the five-minute video Shari Hrdina put together and you’ll see what I mean: http://fallonforum.com/1701-2/.

Could America become fascist?
On this week’s Fallon Forum:
(01:48) Climate Update - Trump’s deadly rollbacks;
(14:22) History of fascism, with Drs. Charles and Stephen Goldman;
(26:12) Could America become fascist?, with the Goldman brothers;
(40:12) Biden praises Trump on Israel, with Maria Filippone;
(52:39) Food Security: Why you should care, with Kathy Byrnes of Birds & Bees Urban Farm.