Dr. Charles Goldman joins me — again. (Yeah, I know, what can we do to get rid of him?) Charles and I discuss: 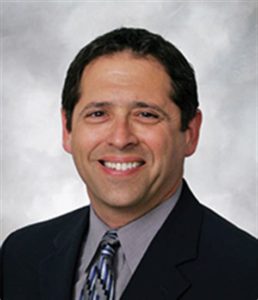 — Where the United Nations climate report intersects with your hamburger.
— President Trump and the recession he hopes to deny.
— The NRA used to be … well, kinda nice.
— Democratic candidates on a stick at the Iowa State Fair.

To the first item, bear with me while I rant about The Club of Vegans, of which Charles is a member. I have no trouble with vegans. The vegan diet is awesome for those inclined to pursue it.

And I have no trouble with vegetarians. In fact, as an omnivore, I will only eat vegetarians (with the exception of my fellow omnivore, The Chicken, and some fish). Tigers. Lions. Your cat and dog — they’re all safe with me. 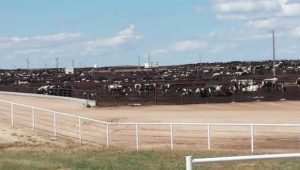 This Colorado feedlot stretched for nearly a mile.

My problem is the blanket condemnation of meat consumption. Do Americans eat too much meat, especially beef? Absolutely. Are industrial-scale livestock operations and vast feedlots an abomination? No argument.

But meat doesn’t have to originate in a confinement or a feedlot. Kathy and I raise animals — chickens and bees — and while I guess you could argue that our bees live in confinements (i.e., hives), they’re part of a sustainable farm ecosystem where creatures nurture plants and plants nurture creatures. (Here’s a brief tour of our urban farm.)

A word about that feedlot photo: I shot that as we walked past during the Great March for Climate Action. It was depressing. Several marchers instantly became vegans. For me, it deepened my commitment to promote sustainable farming.

Later in the March, while walking through a pastoral stretch of Maryland on backroads, I would admire cows living contentedly on pasture. Here’s what I wrote about the two contrasting experiences in my book, Marcher, Walker, Pilgrim:

Today’s walk is full of green fields, warmth, and cattle. I revel in the smell of cow life — the mix of silage, fresh-cut hay, manure, the cows themselves. Unlike the cattle I saw in Colorado’s feedlots, where thousands of miserable beasts stood crammed into grassless pens of mud and feces, these cows enjoy a comparatively idyllic life. I admire how peaceful they are, oblivious to the problems of the world, oblivious to their own inevitable demise, living entirely in the moment and content to have their basic needs met. If cows could work themselves into the lotus position, they would be Zen masters in no time at all.

Let the conversation on optimal dining continue. But let’s not self-righteously force-feed opinions on others. In the end, diet is a choice based on what you believe, and what your body needs.