George Floyd’s murder and the ensuing, mostly peaceful protests have ignited a critical conversation about systemic racism, police brutality, and the growing militarization of law enforcement across the US. My partner Kathy Byrnes wrote this column after we attended a vigil and a protest earlier this week, and I’d like to share it with you:

Ask Those Who are Hurting
By Kathy Byrnes
kathymbyrnes@hotmail.com

I wavered. I hesitated. I was indecisive. For three days, while others in Des Moines showed up at protests over the death of George Floyd, I considered every angle, including my own safety and that of my loved ones. “I’d like to go, but they’re not all distancing correctly.” 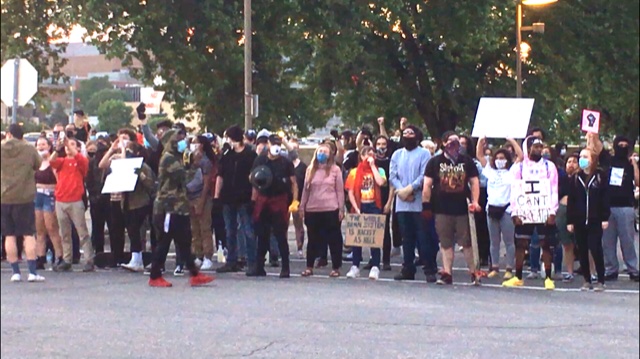 “What if violence breaks out? That goes against my code of ethics.”

Finally, not showing up felt wrong. Ed and I decided to attend a vigil at Union Park. The plan was to attend, and to immediately go home. We showed up wearing masks and distancing as much as possible, as we moved to where we could view and hear the speakers. We listened to friends of varied races and belief systems – leaders in our community – share perspectives, stories, and solutions.

Then we knelt. It was intended to be nine minutes of silence. At the third minute or so, a woman near us began to weep. Then she cried. Then she wailed. A number of times, she shouted out, “That could have been my son!” 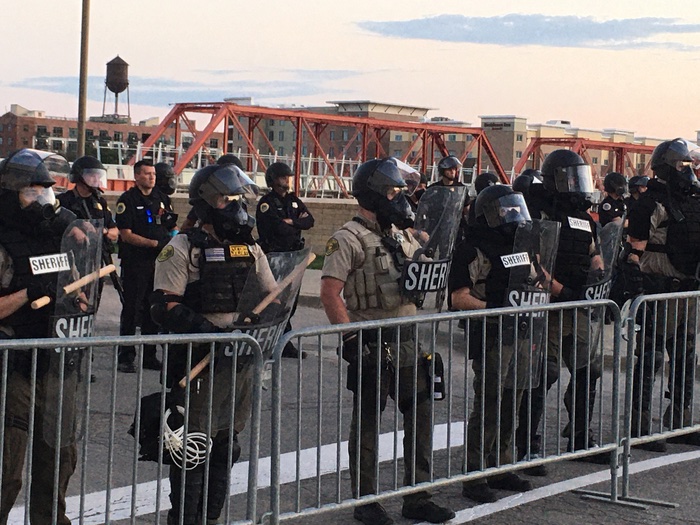 She shouted many things, not only about the injustice of Mr. Floyd’s death and her fear for her son, but about being personally held down. She called out injustice, violence, and hatred aimed at Black people now and during 400 years of American history. She called out slave masters kneeling on the necks and slashing the backs and taking the lives of her ancestors. Our nine minutes of silence became a moment to listen to just this one voice expressing the deepest hurt I’ll ever witness.

After the vigil, Ed asked Representative Ako Abdul-Samad what we could do to help. His quick answer: “Be at the downtown police station at 8:15.” It was already 7:30, so we biked to Court Avenue right away.

Looking around, we saw the fallout from the previous two nights’ riots, stores and restaurants with plywood where windows used to be or protecting what was left of them. We saw more than 100 protesters gathering across the street north of the police station. We saw up to 50 officers on the south side, lining up in riot gear, armed with tear gas and guns. We saw what appeared to be sharp shooters on top of the Embassy Suites hotel.

But we didn’t see Ako. (We learned later that he was at Merle Hay Mall, where protests had already begun to turn violent.) We didn’t know what our role would be, so we stood at the edge of the protest group, watching and listening.

The chanting began. Fists were raised. Voices grew louder, with chants ranging from “George Floyd! Say his name!” to “Fuck the cops.” Bottles of water and milk were passed among the crowd in anticipation of the need to alleviate the sting of pepper spray. Ed and I eventually crossed to the south side of the street to share updates with several friends who were standing near the police line, including Heather Jones, whom we’ve come to know and respect as a voice of justice and progress. 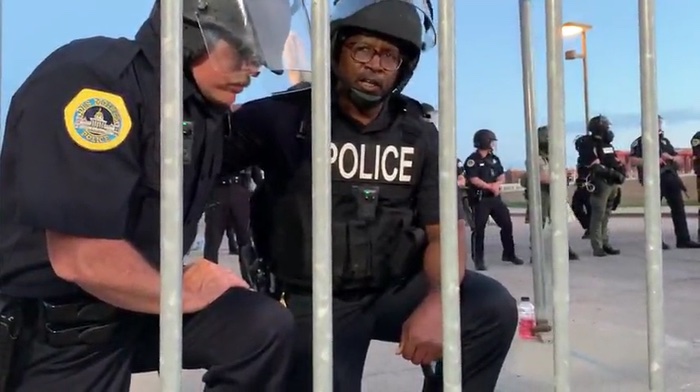 When the “Take a knee” chant began, Ed and I both chose to kneel in front of the line of officers. Two pastors from the Latino community (whose names we are still trying to learn) did the same, and we each, in our own way, gently but emphatically encouraged the officers to follow suit. For the two pastors, it was prayer and appeals to loving kindness. For me, it was catching the eye of individual officers with a mostly silent plea to show their humanity. I could tell from their eye contact with me that some of them did, indeed, want to do just that. For Ed, it was sharing that his daughter in Portland had just texted him a photo of officers there taking a knee, which defused the potential violence.

The first two officers to respond began by raising their fists in solidarity. They then came forward together, knelt, prayed out loud, and took their places back in the police line. With no other officers following suit, the “Take a knee” chant grew louder. Eventually, the lead officer approached one of the pastors with an offer to negotiate – if they all knelt, would the protesters be satisfied and disperse? Ed reassured them that it was seen as a positive show of respect in Portland, and the pastor, accompanied by civic leader Eddie Mauro, mediated between the police and the protesters. 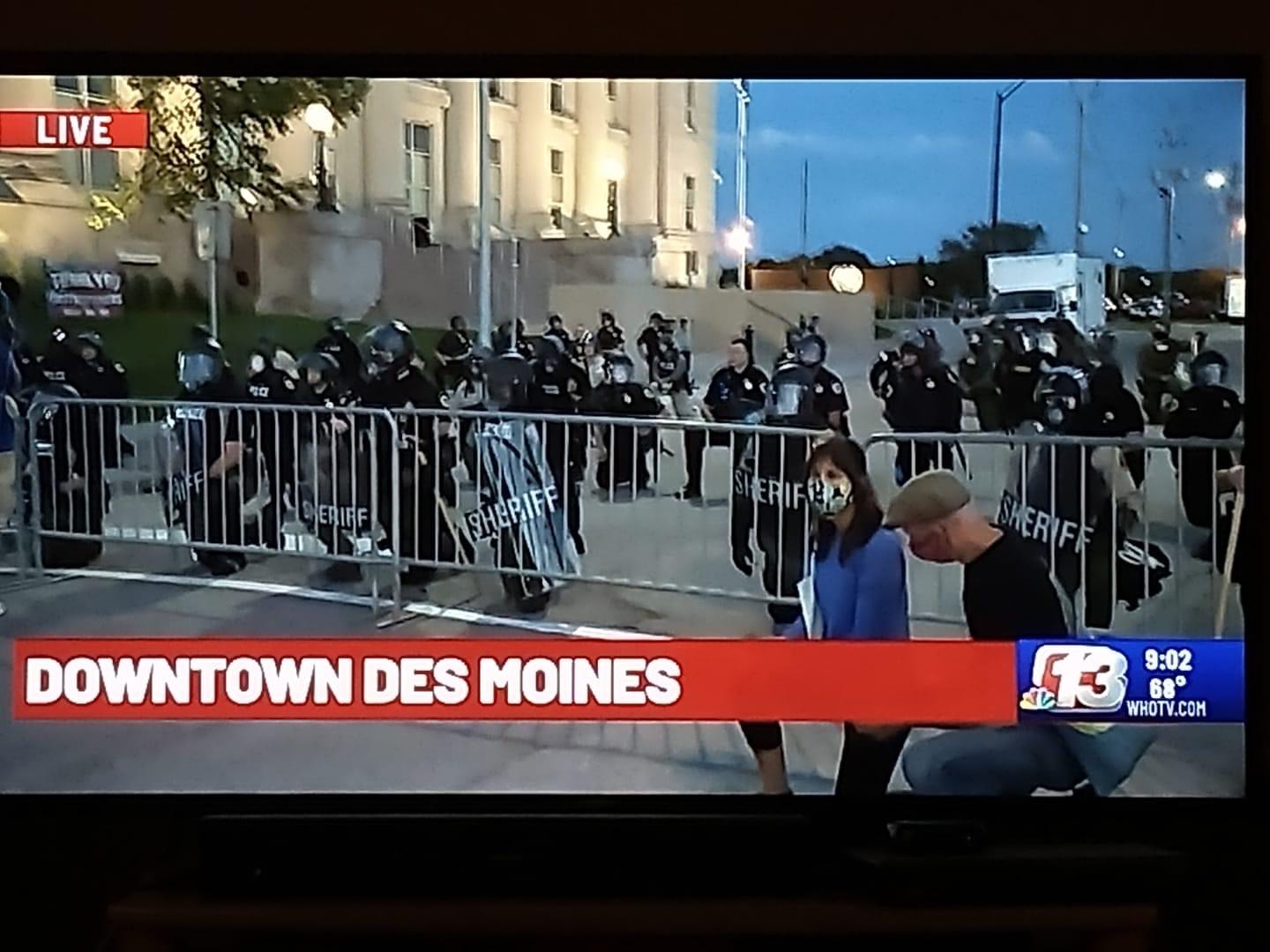 Then, similar to a rain cloud advancing across the sky to satiate a drought-stricken land, the officers knelt one by one. As I peered into their faces behind their riot shields, I saw tears in the eyes of more than a few.

And the protesters honored their agreement. After ensuring one additional line of officers a little way off were also kneeling, the protesters dispersed, despite the efforts of one young man in the crowd who wielded a bullhorn and urged the crowd, “Don’t let THEM tell us when to leave. WE decide when to leave.”

Both sides had begun to leave, and we knew we needed to do the same. Once home, we learned that the situation at Merle Hay Mall was tense. Ako called Ed for an update from downtown, and Ed related how police were convinced to offer at least a symbol of respect that seemed to hold promise of better relations to come. We then turned on a livestream from Merle Hay, and we watched as Ako and several others navigated a very different scene. There were not two distinct groups, but instead a tumult of officers, protesters, and media. The common thread was that Black people needed to be heard and shown respect. Indeed, a couple of officers were visible in the crowd, on one knee, listening to people express their anger and frustration.

A lesson for me in all of this is that, in order to be helpful, White people need to first ask those most affected by the wrong what they need from us. We need to withhold our judgment of how others are responding, and take actions that are true to our natures, even if they are uncomfortable.

Another takeaway is that, even while the officers’ taking a knee was immensely important, it is still just a symbol. A further coming together of the community needs to happen. We all must commit to working toward policy changes that shift the system away from the racism that has been accepted or perpetrated by too many – even by ourselves. Equally, we must commit to personal efforts that shift us toward what Ako was calling for at the vigil earlier in the evening (my paraphrasing here): to see each other’s different cultures as part of what makes our society rich and beautiful, to understand our differences even when we don’t agree with them, and to hold each other up in love. That’s where change for the better happens.

If you live in central Iowa, please support the local businesses and non-profits who make this program possible. Click on their logos elsewhere on this site. Also, check out Story County Veterinary Clinic, Bold Iowa, and Birds & Bees Urban Farm.

Thanks for supporting the sane alternative to Rush Limbaugh!

3 Replies to “Officers kneel with protesters at George Floyd action”