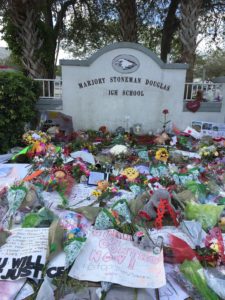 Three things strike me as I skirt the perimeter of Marjory Stoneman Douglas High School in Parkland, Florida, site of the most recent school shooting — the eighteenth of 2018!

First, the strong showing of local law enforcement. Given the circumstances, their presence is understandable and appreciated.

Next, the sprawling memorial to the seventeen students and teachers shot and killed on February 14. The memorial is a spontaneous outpouring of grief and respect — a colorful wall of flowers, urns, candles, stuffed animals, balloons, flags and signs stretching the length of the fence to the school’s entrance. 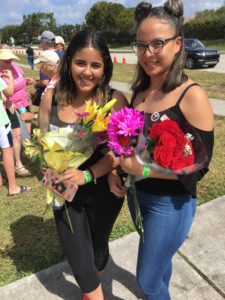 I talk with two students from a nearby high school. Like so many others, they’ve brought flowers to add to the growing tribute to those who lost their lives. They don’t understand why anyone should be allowed to own an assault weapon. Given the heightened national discussion in the wake of the Parkland shooting, they now feel hopeful. 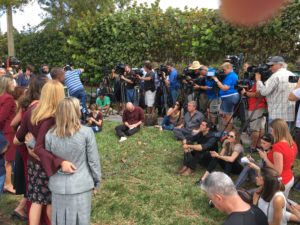 Finally, the overwhelming throng of reporters and media crews toting cameras, microphones and notepads. The school has been closed since the shooting. Today, teachers return and join school board members and Robert Runcie, the Broward County Public Schools Superintendent, at a press conference. Robert is focused on the immediate well being of teachers and students and says, “We’re going to do what we can to relieve the stress, the pain, and the grief that we know our teachers are going through. And of course, when our students get back we’ll be ready to support them as well.” 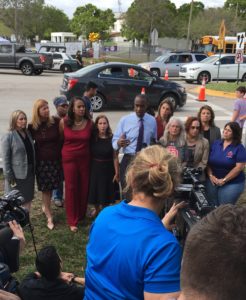 I ask Anna Fusco, President of the Broward Teachers Union, about assault weapons. There are many, many aspects to the debate about gun violence, including concerns about mental health, violence in the media, and the extent to which Americans have become isolated from each other  and nature. To me, the most pressing issue, one of the problems we can and should fix immediately, is that nearly anyone can own an assault weapon — a weapon whose sole purpose is to kill as many people as quickly as possible.

“Teachers should not be armed,” Anna tells me. “To say that we should be the chosen ones to have a loaded gun on our campus with our students, it’s not our job, it should not be put on us, and I’ve not heard from one, not one teacher who wants to have a gun on their person.” 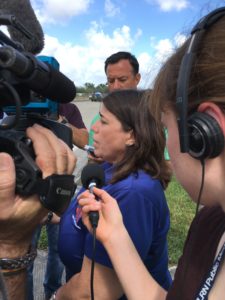 I interview Anna, and ask if she believes a ban on assault weapons is an accomplishable goal. “I believe it can happen,” she responds. “All it takes is sticking with it and being persistent and being relentless and making sure it goes through the process and the channels and things happen.”

Given the political clout of the NRA and the sad reality that the Republican Congress is its wholly owned subsidiary, it won’t be an easy fight. Until Parkland, it seemed that too many Americans had grown numb to gun violence. But something has changed. There’s momentum like never before, with a palpable shift in progress. Parkland students themselves, and the thousands of other students who have quickly coalesced into a national movement, may well bring this crisis to the tipping point where something meaningful finally gets done.

Because the only thing bought-and-paid-for politicians fear more than losing the financial backing of their biggest donors is losing the support of their constituents and being voted out of office. The polling on various gun control measures indicates an electorate increasingly ready for gun control. While we expect the NRA, Congress, and President Trump to continue to stonewall, it may no longer be possible for them to put the brakes on the momentum that’s building.

Parkland students and a wide range of allied organizations have called for a massive, coast-to-coast mobilization on March 24, including a March for our Lives rally in Des Moines. It’s important that all of us stand with them, even if we risk offending some friend or family member who has not yet grasped the urgent necessity for reform.

Yes, this is truly a historic moment. Think of the comparable points in time with Women’s Suffrage, the civil rights movement, the Vietnam War, and most recently marriage equality where the collective consciousness had evolved enough — through both hard work and tragedy — that a paradigm shift was inevitable. We may well be at that point with regards to gun violence, and it’s important to keep pushing, and to push hard.

If by March 24 Congress has done nothing, I suggest the next step for this national mobilization be a general strike. It could start with students refusing to attend school until specific, significant changes are accomplished. If that happens, those of us who aren’t students must be prepared to stand with them. A general strike is one of the most powerful social change tools available. But to work, it has to be broad-based with massive public buy-in — and it has to be well organized.

In the meantime, let’s do all we can to encourage a huge turnout on March 24. In doing so, we not only honor those killed at Parkland and in other mass shootings, we honor our own children, and the children and families who will be spared the agony of losing a loved one to gun violence in the future.

2 Replies to “My visit to Parkland, Florida”