First, let it be noted that whoever wins the Democratic nomination will be an infinitely better president than Donald Trump. If your guy or gal doesn’t get the nod, rally behind the winner regardless. Our country, and indeed our species, might well be doomed under four more years of President Trump. (Read “Donald Trump’s Record on Climate Change” for details.)

When I say “doomed” I mean it. If you still doubt that humanity faces the risk of extinction, or at minimum, the complete collapse of civilization, check out this alarming report by InsideClimate News.

While every Democrat running for president takes the climate crisis seriously, only one instills complete confidence that climate will be their top priority. That candidate is Tom Steyer (read on to see who is my second choice, which matters a lot in the Iowa Caucuses). Tom constantly assures voters that climate is the first item he’ll tackle as president. He also has the strongest track record, pumping his money, time, and energy into climate activism for over a decade.

These two things set Tom Steyer apart from every other Democratic presidential candidate, and that’s why I’m supporting him.

“But what about Bernie?” you say. “Bernie has been fighting for climate action for years. He has the backing of AOC, Sunrise, and other Green New Deal proponents.”

Bernie’s track record over the years on a range of important issues has been solid and consistent. After Steyer, Sanders’ rhetoric on climate is the strongest. For these reasons, if Steyer is not viable at your caucus, I hope you’ll support Sanders during realignment. Vice-versa, if Sanders is not viable, I hope you’ll stand with Steyer.

Steyer has my support over Sanders for three key reasons:

1. As noted above, Steyer’s record on climate is second to none. He’s walked the walk on climate action with greater focus and commitment than any other Democrat running for president. 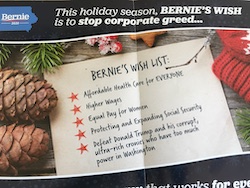 2. Sanders’ track record on climate is not without blemishes. When I spoke with him in 2014 about the Dakota Access Pipeline, he wasn’t sure where he stood. And in 2015, Sanders was slow to come around to calling climate change an existential emergency. Steyer, on the other hand, has opposed oil and gas pipelines and embraced climate emergency language longer than any presidential candidate. (Check out this 2015 interview in the Los Angeles Times.) 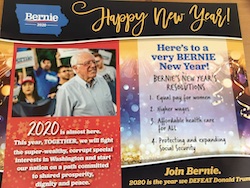 3. It’s hard to take Sanders’ claim to being the Democrats’ climate champion seriously. This fall in Des Moines, Sanders hosted a powerful Climate Crisis Summit, at which he said that climate was his top priority. Yet Sanders immediately reverted to delegating climate to a much lower standing on his “wish list.” In fact, in the last two fliers I received from Sanders, climate didn’t even make that list.

Those criticisms aside, Sanders is by far the second strongest candidate on climate. Beyond climate, Democratic voters are rightfully fretful about nominating a Democrat who can beat Donald Trump. With that in mind, remember:

— At the state level in Iowa, David Young, Joni Ernst, and Kim Reynolds all handily beat Democrats pegged as elite elements of the economic and political establishment.

The stakes are higher than ever in the 2020 presidential election. Democrats can’t afford to make the usual mistake of nominating a perceived insider, e.g., Joe Biden. Both Sanders and Elizabeth Warren, despite years of public service, can confidently wave the anti-establishment banner. The same goes for Marianne Williamson and Tulsi Gabbard — two strong, progressive women who saw their campaigns torched early on by the DNC and its mouthpieces in the corporate media.

Steyer, despite his wealth, has operated outside the political mainstream. That will serve him well in a head-to-head match-up against Trump. So will Steyer’s credentials as someone who has succeeded in business. His stance on term limits resonates with voters across the political spectrum, too.

“But Ed,” you say. “How can you possibly support a billionaire for president?”

Given my consistent critique of income inequality over the years, that’s a legitimate question. Here’s what sets Tom apart from other wealthy Americans:

— Giving half his money to climate action and other important public work;

— Promising to enact a wealth tax so that he and all rich Americans pay significantly more in taxes;

— Investing in sustainable agriculture, including the TomKat Ranch.

On that last note, earlier this fall, my partner, Kathy, and I spent an hour visiting with Tom’s wife, Kat Taylor. We were deeply impressed. Kat truly understands regenerative agriculture and is an articulate spokesperson for sustainable farming. Her voice and vision would help direct the farm policy component of Steyer’s climate emergency plan. Kat’s presence in the administration would be a blessing to all of America, and especially to Iowa, where farming and food production are vital.

I hope you’ll join me in caucusing for Tom Steyer. He is both our best hope for defeating Donald Trump and to move forward with an emergency response to the escalating climate crisis. Thank you.