From July, 2015 through February, 2016, The Climate Mobilization focused on the Iowa Caucuses, mobilizing Iowans to lobby presidential candidates to support a full-scale transformation of the American economy to fight the climate crisis. Working with TCM founders Ezra Silk and Margaret Klein Salaman, Ed Fallon and Shari Hrdina led the Iowa effort.

America urgently needs a heroic, collective response to climate change. We need the kind of mission-driven national mobilization that fired-up our country during World War II. A new initiative called the Pledge to Mobilize gives people a clear way to demand that politicians get behind the major climate mobilization we urgently need.

And Iowa is now front-and-center in the campaign to make that happen. 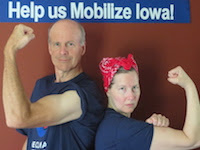 In the months leading up to the Iowa Caucuses, Shari Hrdina (who bears a striking resemblance to Rosie the Riveter, does she not?) and Ed are working with The Climate Mobilization to build a grassroots movement in Iowa. We hope you’ll sign the pledge and volunteer to help us get the message out across the state.

Ed writes: “During last year’s Great March for Climate Action, 90% of my time was spent walking through so-called “Red America.” I talked a lot with conservative Republicans. I would tell the story my Dad told me when I interviewed him for a book about his life after he was diagnosed with terminal cancer. My Dad was a kid during World War II, growing up in the South Bronx, the son of Irish immigrants. He couldn’t understand why America was doing nothing in response to the atrocities occurring in both Europe and the South Pacific. Then Pearl Harbor happened, and the entire nation mobilized. My Dad would go down to the railroad tracks and collect cigarette boxes. He’d remove the foil for the scrap metal drives that were crucial to the war effort. That was his contribution, something he felt proud of.”

And when America got involved as a nation, we retooled an entire economy in a matter of months.

With climate change, we again need that kind of national response, that collective sense of purpose and commitment. In Iowa, we have a unique opportunity to challenge the candidates running for President. We deserve to know if they are willing to confront the grave truth of the climate crisis honestly, courageously, and with the kind of determination our parents and grandparents demonstrated during World War II. We deserve to know if they have the wisdom and fortitude to pledge to mobilize NOW to fight climate change.

Will you work with Shari and Ed and The Climate Mobilization to bring the urgency of the climate crisis to the forefront of the Iowa Caucuses?  If you’re ready to help or if you want to discuss further our plan to make this effort one of national and international significance, email Ed at fallonforum@gmail.com.

2 Replies to “The Climate Mobilization”